Auroch’s Leinster drilling could see it provide BHP with feedstock

Shares in Auroch Minerals Limited (ASX:AOU) have soared roughly 300% in the last six months, but there could be more upside to come company announcing today that it has commenced diamond drilling at the Leinster Nickel Project in Western Australia, and assays from the maiden drilling program at the Nepean Nickel Project are imminent.

Both the quality of the grades and the near-surface nature of the mineralisation suggest that this could be a highly economical project.

The drill programme will begin with four diamond drill-holes, designed to test high-priority magnetic targets directly along strike from the shallow high-grade nickel sulphide mineralisation at the Horn Prospect.

Following diamond drilling the company will conduct reverse-circulation (RC) drilling to further test the strike potential along from the Horn, as well as some of the more-advanced regional targets across the Leinster tenure.

The combined diamond and RC drill programmes will consist of approximately 1200 metres of diamond drilling and 1800 metres of RC drilling.

Drilling success at Leinster would be highly material given that BHP has expressed a desire to ramp up its nickel production to meet growing global demand fuelled by the shift to electric vehicles.

Mining giant BHP could boost production on commercially viable terms and has commenced trying to source contracts with Nickel Sulphide deposits to feed into its Nickel West refineries.

It has also been in talks with Tesla to increase supply.

‘The Big Australian’ has fleshed out how it could restart the Kambalda Nickel Concentrator, and as you can see in the group’s October presentation Leinster has the potential to be a key source of feedstock. 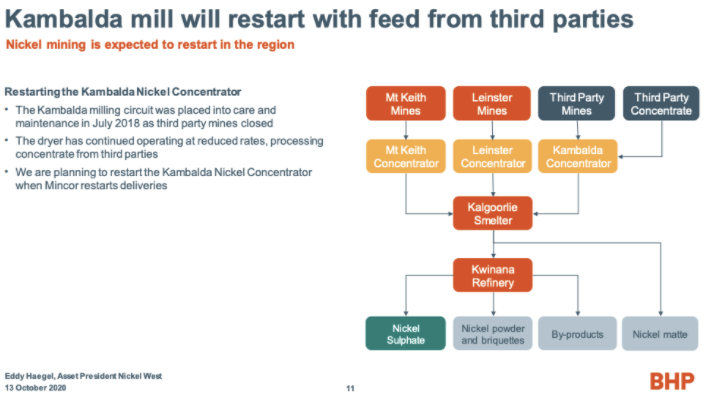 A detailed review of the project’s geochemistry and geophysics identified that the high-grade nickel-sulphide mineralisation at the Horn was strongly coincident with an aeromagnetic anomaly, and that further similar aeromagnetic high anomalies exist directly along strike from Horn which have never previously been drill-tested.

The highest priority of these aeromagnetic target areas that can be seen below is the magnetic anomaly directly north-west of the Horn. 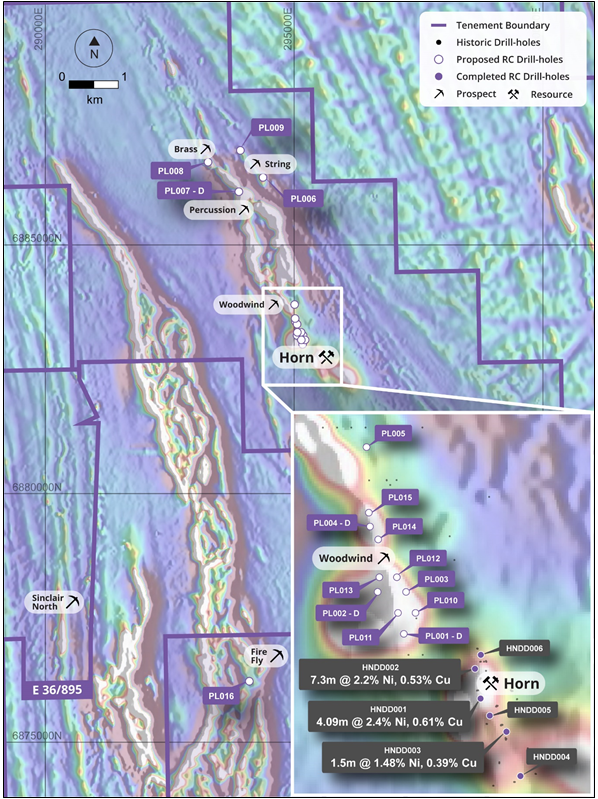 This target has been named the Woodwind Prospect, and management has planned three diamond holes and a further eight RC holes to test this prospect’s potential to host significant nickel sulphide mineralisation.

Further to the north-west are the String and Brass Prospects which are also defined by untested magnetic highs.

Commenting on the upcoming drilling program and underlining the significance of recent drilling at Nepean, managing director Aidan Platel said, “We are excited to be back on the ground at Leinster and drilling such high-potential exploration targets.

"Our drilling last year confirmed thick high-grade nickel and copper sulphide mineralisation at very shallow depths at the Horn Prospect, but importantly it also showed how well this mineralisation is 'mapped' by the aeromagnetic anomaly there.

"We have very similar aeromagnetic anomalies along strike to the north-west of the Horn which basically have never been drilled, so we are eager to test these anomalies and see if the relationship between the aeromagnetic highs and the nickel sulphide mineralisation continues along strike.

"Our maiden RC programme at Nepean has been completed, which tested both near-mine shallow drill targets as well as more regional greenfields targets along the full 10 kilometres of prospective strike.

"We are awaiting assay and DHEM results which we expect to receive over the coming weeks.”

In total, 32 holes for 3,397 metres were drilled, testing both shallow targets near the historic high-grade Nepean Nickel Mine and regional aeromagnetic targets along strike. 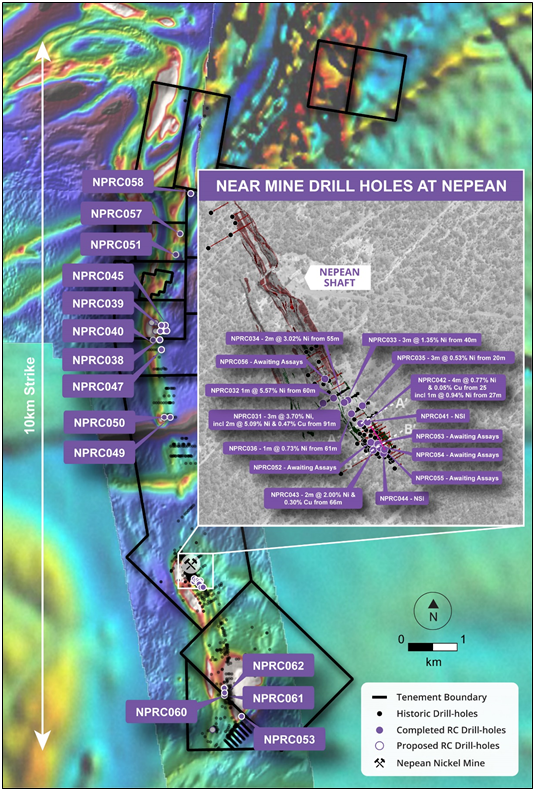 All samples have been delivered to the laboratory and DHEM surveys are underway.

The results from this programme will be modelled and used to define targets for the next phase of drilling at Nepean.