The high priority programme will comprise up to five drill-holes targeting economic nickel sulphide mineralisation below the historic Nepean nickel mine workings.

Auroch’s share price appears to have come under pressure due to a sharp decline in the nickel price in recent weeks.

However, it should be noted that the retracement was from a high of US$8.34 per pound, a level it hadn’t traded at for more than five years.

Nickel has had an outstanding rally, increasing from less than US$6.00 per pound 12 months ago to hit a high of about US$8.80 per pound in February.

It was a retracement in June from US$8.34 per pound to US$7.84 per pound that placed a drag on Auroch, but it is worth noting that in the last two days there has been a rebound to US$8.06 per pound.

Hence, upcoming work at the historic high-grade Nepean nickel sulphide mine bodes well for the company.

Nepean was the second producing nickel mine in Australia, produced more than 1.1 million tonnes of ore between 1970 and 1987 for over 32,000 tonnes of nickel metal at an average recovered grade of 2.99% Ni.

To be able to produce these grades in a high nickel price environment would generate substantial cash flow for Auroch.

A large flat-lying pegmatite vein cross-cuts the nickel sulphide mineralisation at the base of the Nepean mine workings, drawing an analogy to Western Areas’ (ASX:WSA) Flying Fox nickel mine in Western Australia, where despite several large cross-cutting granite sills the nickel sulphide mineralisation continues at depth below the sills as shown below. 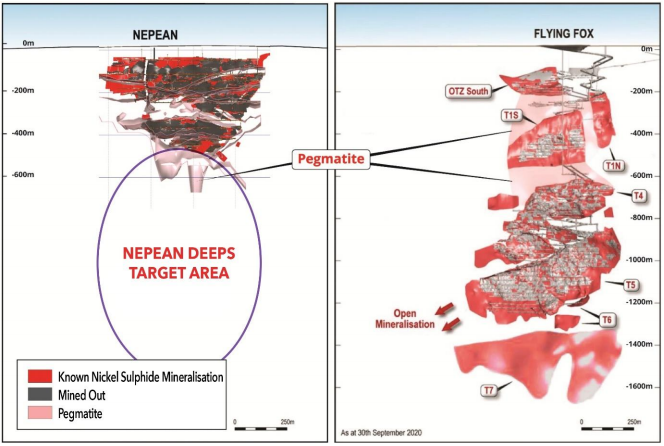 The Flying Fox mine remains in operation having mined down to 1,200 metres below the surface and produced over 100,000 tonnes of nickel more to come.

Nepean Deeps is the key to the future

Despite the analogy to the Flying Fox nickel deposit and the high-grade historic production of the Nepean mine, no significant exploration down-plunge of the mine has occurred, with effectively no drilling into the “Nepean Deeps” target area highlighted above.

In discussing the upcoming exploration campaign and the significance of Nepean Deeps, Auroch managing director Aidan Platel said, “We are extremely excited to begin work on our maiden drill programme of the Nepean Deeps target.

"The life of the historic high-grade Nepean nickel mine was cut short in 1987 when nickel dropped to below US$4,000/t (currently more than US$17,000 per tonne), so we knew when we acquired this project that it still had a lot more to give.

"The presence of the flat-lying pegmatite vein at the base of the old mine workings is an important factor in our drilling strategy as we know geologically that the pegmatite veins are later features that developed a long time after the massive nickel sulphides were emplaced in the basal channel, and hence, logically, the channel and the nickel mineralisation should continue beneath the pegmatite, exactly as was the case at Flying Fox.

"As such, the Nepean Deeps target area is a very high-priority target area and we look forward to commencing our maiden drill programme there next month.”

For more information read this Wise Owl report, then follow the links to the Company Page: AOU to Drill for Nickel Underneath Historic Nickel Mine