AOU has three nickel projects in Western Australia, one of the world’s richest regions for nickel sulphide: Nepean, Leinster and Saints.

It is the Nepean project which is currently the company’s primary focus.

Nepean was the second producing nickel mine in Australia, producing just over 1.1 million tonnes of ore between 1970 and 1987.

AOU sees high potential to build on the existing remnant resources with drill targets along strike and at depth.

“The effectiveness of the ground MLEM survey in detecting such a quality high-potential drill target so early in the survey has exceeded all expectations,” Auroch Managing Director Aidan Platel said.

“Given the lack of historical drilling along the 10km of potential strike from the high-grade Nepean nickel mine, we have always believed that the systematic application of modern geophysical and exploration techniques would have great potential to lead to significant new nickel sulphide discoveries.

“As such, the identified EM conductor is a compelling drill target for us and will be tested immediately with a diamond drill programme. Parallel to this, the MLEM survey will continue as scheduled over the critical areas of the Nepean strike, and will be completed within the next fortnight. We look forward to seeing what other conductive bodies it may uncover.” 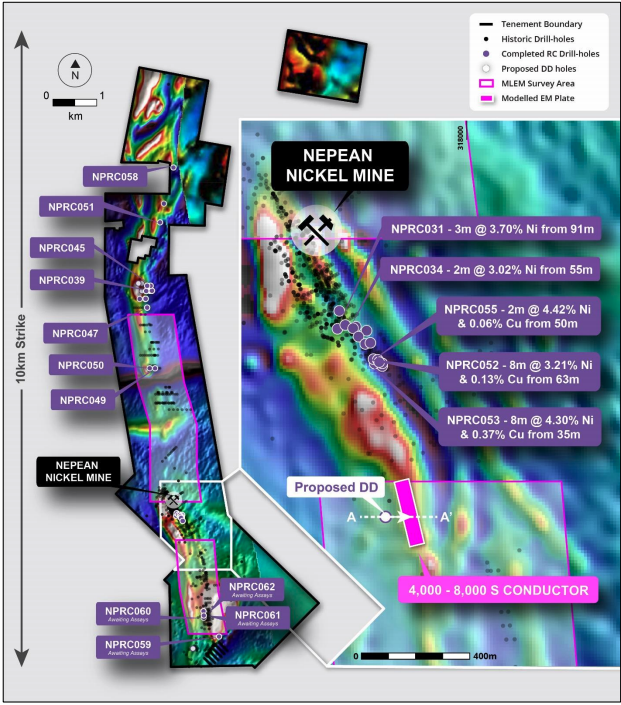 Details of the survey

As stated, the MLEM survey initiated last week has successfully identified a significant conductor at the Nepean Nickel Project.

The conductor has been modelled at 250m below the surface, about 1km to the south of the historic high-grade Nepean nickel mine. The moderate-high strength of the modelled conductor is in the range of 4,000 - 8,000S which is typical of conductive bodies such as semi-massive and massive sulphide mineralisation.

In other words, it represents a high priority drill target.

The modelled conductor is located in an area that has been poorly tested by drilling at depth; however, a historic drill-hole (ND051) 50m to the north intercepted disseminated nickel sulphides within an ultramafic unit, which adds further support to the potential that the conductive plate may represent significant nickel sulphide mineralisation.

Auroch will immediately test this high-potential target with diamond drilling, commencing with a 350 - 400m drill-hole designed to intercept the modelled conductive plate at a down-hole depth of ~290 - 300m.

The hole will be drilled to approximately 50m past the basal footwall contact with the underlying basalt unit, in order to provide an adequate depth for follow-up down-hole EM (DHEM) surveys to test for extensions and/or additional conductive bodies at depth.

What’s next for AOU

AOU will be busy over the next four to six weeks, leading to further newsflow.

On the agenda is: