Auroch Minerals Limited (ASX:AOU) has released outstanding assay results from its diamond drilling campaign at the Woodwind and Percussion Prospects at the company’s 100%-owned Leinster Nickel Project in Western Australia.

All too often companies hang their hat on being close to other major projects, but in the case of Leinster it isn’t just nearology, it is the similarities of mineralisation and geological trends that provide credibility in terms of Auroch’s search for similar ore bodies.

Adding further weight is the mix of wide intersections and robust grades evidenced in the assay results, as well as the alignment between aeromagnetic trends and a thick package of fertile, nickel sulphide-bearing ultramafic rocks.

Management has always had a very upbeat view of this asset, one of a number of highly prospective nickel projects in its portfolio, but one where little exploration has been undertaken to date, indicating the scope for substantial upside as further assay results come to hand from this program and a more extensive drilling campaign is undertaken in the relatively near-term.

In terms of the commodity price picture, this news couldn’t be better timed with the nickel price not far off the seven-year high of nearly US$20,000 per tonne that was struck in February.

Assay results have been received for four diamond drill-holes, part of a five-hole (1,660 metre) regional drill programme designed to test the high-potential Woodwind and Percussion Prospects.

These two prospects are located directly along strike from the Horn Prospect where drilling has delineated shallow high-grade nickel sulphide mineralisation, and they are defined by aeromagnetic high anomalies that are very similar to that which defines the Horn Prospect as indicated below. 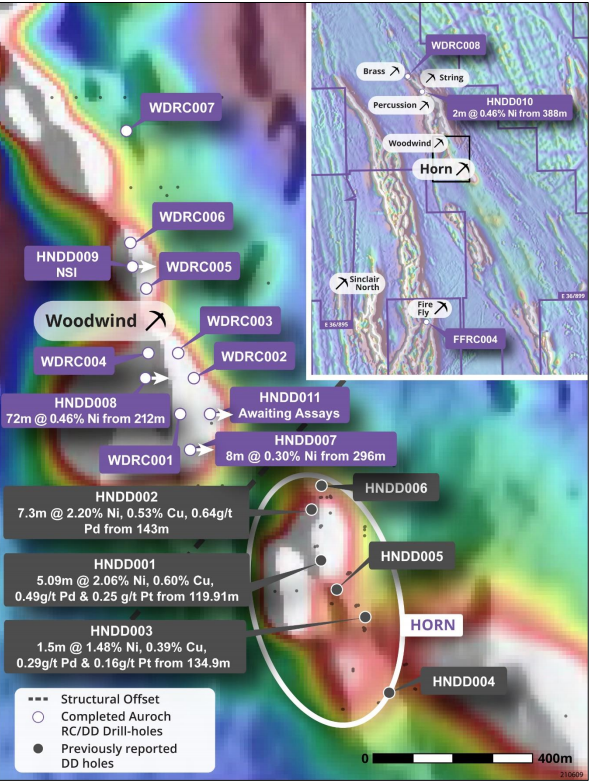 Consequently, these prospects have been elevated in status to high priority drill targets.

The following is a snapshot of some of the results (see location of drillholes above).

Most importantly, these results highlight that the aeromagnetic trend at Leinster is coincident with a thick package of fertile, nickel sulphide-bearing ultramafic rocks.

As such, these results are very encouraging as they greatly improve the prospectivity of these target areas and demonstrate the potential for massive nickel sulphide mineralisation to have developed in traditional channel positions within the Woodwind and Percussion Prospects.

In what could emerge as further market-moving news, assay results remain pending for the fifth diamond drill-hole (HNDD0011 - see above) completed at the Woodwind Prospect.

From a geological perspective, pyrrhotite and pentlandite (nickel sulphide) sulphides were observed in ultramafic rock close to the basalt – ultramafic contact, and these were confirmed with a portable XRF machine.

The stringers were millimetric to (<5 centimetres) in width and were frequent over 27 metres from about 170 metres downhole (see the following diamond drill core).

The presence of stringers of nickel sulphides close to the basal contact further confirms the prospectivity of the target area and suggests the company is getting closer to vectoring in on massive nickel sulphide mineralisation at the Woodwind Prospect.

Nine RC drill-holes were also completed for 1,493 metres at the Woodwind and Percussion Prospects, as well as other high-priority regional targets such as the Brass and Firefly Prospects.

Assays are pending for these holes and are expected in approximately three weeks.

DHEM (downhole electromagnetic) surveys are being completed on all drill holes to identify any conductors in or around the completed holes that may potentially indicate massive nickel sulphide mineralisation.

The DHEM surveys will be completed this week and any identified conductors will be used to target the next phase of drilling.

Discussing the exploration results and in particular highlighting that this is exactly the geology that is consistent with Rocky’s Reward and Perseverance, Auroch managing director Aidan Platel said, “This has been an exceptional start to our regional exploration at the Leinster Project.

"After outstanding shallow high-grade nickel-copper sulphide results from drilling at the Horn Prospect in late 2020, we were intrigued by what the magnetic anomalies along strike from the Horn may hold, most of which had never seen a drill-hole.

"The results from just our first four drill-holes have already shown that these aeromagnetic highs at the Woodwind and Percussion Prospects do indeed define thick fertile ultramafic units that have cumulate ultramafic phases with disseminated nickel sulphides – that is exactly the geology seen proximal to the massive nickel sulphide mineralisation at Rocky’s Reward and Perseverance, one of the largest nickel sulphide deposits in the world that is only 35 kilometres to the north of our Leinster Project.

"The diamond drilling has been particularly important for our geology team to see these all-important textures and structures, and it has helped them to identify the overturned structural setting at Woodwind, similar to that of the Horn.

"The presence of nickel sulphide stringers in hole HNDD0011 suggests we are getting closer to significant accumulations of nickel sulphides, and we are eager to see what the pending DHEM and assay results will tell us as we attempt to vector in on massive nickel sulphide mineralisation in this highly prospective trend.”