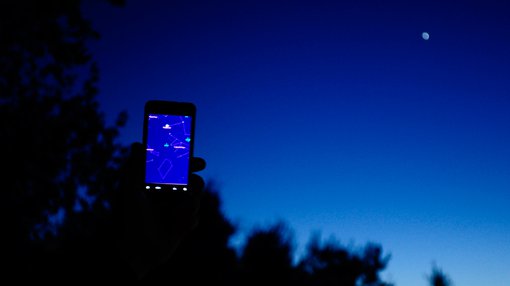 Importantly, the grades of more than 1% are robust in terms of sale to end users, being predominantly manufacturers of electric vehicles and batteries for use in electronic devices such as tablets and smart phones.

This is an extremely important development as some analysts are predicting that cobalt will overtake lithium as the high profile new age commodity of 2017.

There is certainly plenty of hype around cobalt at the moment with Korab Resources’ share price soaring on Friday simply on the back of a first stage review of a project that could be prospective for cobalt.

Although, it should be noted that historical data in terms of earnings performance and/or share trading patterns should not be used as the basis for an investment as they may not be replicated. Those considering this stock should seek independent financial advice.

Despite the project being located in the relatively remote Rum Jungle area of the Northern Territory and the fact that it does not have any potential guide as to whether there is a measured resource or whether there are commercially viable grades, the company’s share price spiked from the previous day’s closing price of 1.8 cents to close at 4.1 cents, representing a gain of approximately 125%.

Again, past performance is no indication of future performance and investors should take a cautious approach to their investment decision if considering this stock for their portfolio.

By comparison, ARV has the benefit of historic underground mining data which provides some indication of grades and the extent of mineralisation, as well as being situated near Karratha. This data will be used to assist in re-evaluating the resource.

The company has released some exceptional drilling results today with one drill hole having intersected 4 metres grading 33.6 grams per tonne gold. Geological records demonstrate there is generally a strong correlation between gold, copper and cobalt mineralisation. Furthermore, past drilling in this area identified robust grade gold, copper and cobalt mineralisation. 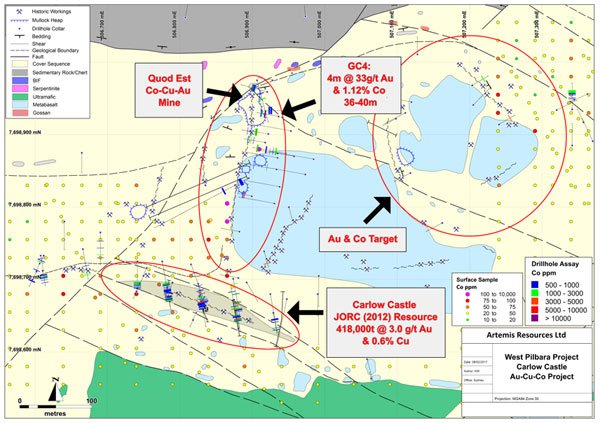 Importantly, previous mining and exploration efforts in the area were primarily focused on gold and copper exploration and mining, with only cursory historic efforts made to understand the area’s significant cobalt potential.

Artemis is progressing a drilling campaign with a view to upgrading the existing JORC 2012 Inferred Mineral Resource of 418,000 tonnes grading 3% grams per tonne gold and 0.6% copper for total contained metal of 40,000 ounces of gold and 2500 tonnes of copper at the Carlow Castle project.

However, with the cobalt price pushing up towards US$40,000 per tonne, Lenigas said, “We believe that cobalt, copper and gold now need to be considered integrated at Carlow Castle and Artemis is undertaking a complete re-evaluation of this very exciting 100% owned project”.

Macquarie says 2017 may be cobalt’s year

It was only last week that Macquarie came out with an extensive paper on the prospects for cobalt in 2017, saying, “If last year was lithium’s time, for 2017 its battery peer cobalt may be the one receiving more attention”.

The broker went on to highlight the fact that prices have accelerated to levels last seen in 2011, and with demand from the portable electronics sector recovering and supply growth relatively stagnant this can be fundamentally justified.

Macquarie pointed out that China has next to no domestic mine supply and it is highly reliant on the Democratic Republic of the Congo (DRC) for its cobalt units. The prioritisation of higher quality battery development by the Chinese government could even open up the coveted new energy vehicle market to greater cobalt penetration according to Macquarie.

This is certainly reflected in price movements which have increased about 70% from circa US$10 per pound to approximately US$17 per pound, a level that Macquarie only expected the metal to reach in the medium term. The closing cobalt price as at February 7, 2017 was US$17.35 per pound or US$38,250 per tonne

The broker also noted that this move has been slightly exceeded by an increase in cobalt chemical prices, the raw material crucial for the global rechargeable battery industry. On this note, Cobalt Tetroxide prices in China have roughly doubled in RMB terms since mid-2016.

Looking at the demand picture Macquarie highlighted that lithium-cobalt batteries are the staple of consumer electronics, and have suffered as core areas have declined with both laptop and tablet shipments dropping over 10% year-on-year in 2016.

However, the broker noted that demand picked up strongly in the second half of 2016 as a result of increased sales for smartphones. Stressing the much improved demand picture, Macquarie said, “This is highly beneficial for cobalt, while LCO batteries also continue to gain penetration in other areas, notably power tools”.

Macquarie’s projections regarding the supply demand balance out to 2021 indicates supply falling short of demand initially in 2018 with increasingly large deficits of between 3200 tonnes and 7200 tonnes between 2019 and 2021 inclusive.

It should be noted that broker projections and price targets are only estimates and may not be met. Furthermore, commodity prices do fluctuate and caution should be applied to any investment decision here and not be based on spot prices alone.