Archer Exploration Limited (ASX:AXE) has this morning informed the market it has identified an Exploration Target for its Jamieson Tank Manganese project located near Cleve, South Australia.

A review undertaken by AXE of historical drill results at the project has led to the establishment of a maiden exploration target of 15Mt–25Mt at a grade of 8-12% manganese.

Critically, Electrolytic Manganese Dioxide (EMD) has been made from Jamieson Tank project material grading 12% manganese, and the mineralisation predominantly comprises cryptomelane resulting in the potential for relatively high metal recovery.

The newly identified Exploration Target is based on exploration results from 208 historical drill holes and a robust geological model, which extends 20m beyond both the most northerly and southerly drill sections and to a vertical depth of 100m. Positively for AXE, the mineralisation remains open along the strike and at depth.

AXE initially drilled the Carappee Hill portion in 2008 with follow up drilling under a joint venture between AXE and the manganese miner and processer OM Holdings Limited (ASX:OMH). An additional 11,000 metres of drilling was completed by Monax and OMH at Jamieson Tank.

These drilling campaigns intersected substantial widths of manganese mineralisation over an extensive area, and now provide AXE the impetus to undertake further exploration. Having now identified an Exploration Target, AXE plan to follow up with geophysical surveys and diamond drilling.

“The Exploration Target is based on a relatively conservative interpolation of grade and tonnage from historical drill results. Jamieson Tank is ideally situated close to existing rail, power, gas and other significant infrastructure which will aide further exploration and possible project development.

“The development of this potential EMD project is consistent with Archer’s strategy of pursuing opportunities in the reliable energy space,” he said.

It should be noted that AXE is an early stage play and anything can happen, so seek professional financial advice if considering this stock for your portfolio.

While this is a positive development for the company, the announcement also stated that investors be aware that the potential quantity and grade of the Exploration Target is conceptual in nature, and there has been insufficient exploration to estimate a Mineral Resource.

The new Exploration Target as been determined “over a range of metres below the surface, which is greater than the average depth extent (54m) of the drill holes used in the Exploration Target calculation” and “does not include any potential manganese mineralisation situated along strike from the last drill section, nor any manganese mineralisation below the 137m RL”.

Last month AXE announced that test work undertaken by an independent laboratory confirmed the manganese from AXE’s Jamieson Tank project can make electrolytic manganese dioxide (EMD) — a critical component used in the manufacture of cathodes for lithium-ion, alkali and other batteries. 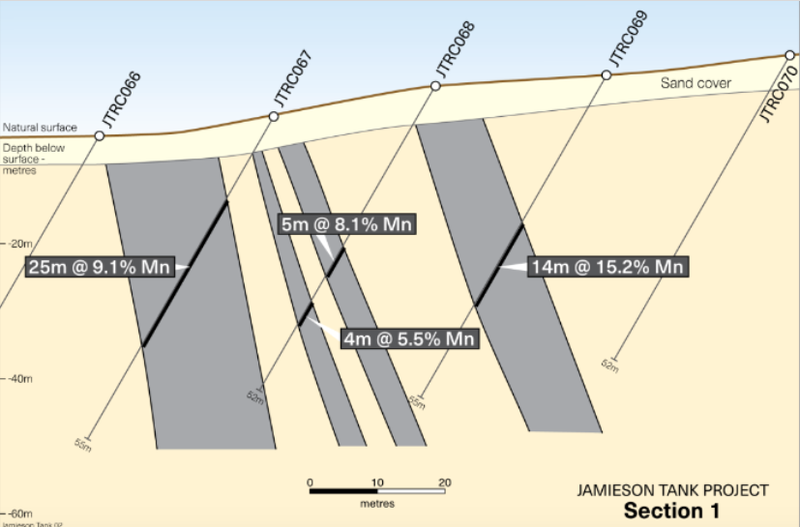