AXE had previously completed a large (+4,500 samples) geochemical survey at Blue Hills which led to the discovery of the Hood, Katniss and Hawkeye prospects — as seen on the map below. 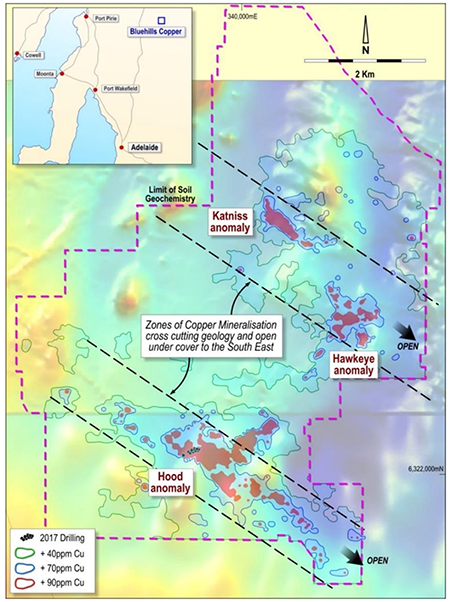 However, during this earlier exploration, AXE found that some of the target area was covered by transported soils meaning that RAB drilling through the soils was needed to test the underlying bedrock. The key objective of the drilling was to confirm the presence of copper in the bedrock at Hood, Hawkeye and Katniss as well identify any anomalism under cover at both Ygritte and Legolas.

The results from the limited RAB drilling, and the geophysical modelling undertaken, further supports the model that the copper and gold mineralisation at Blue Hills is associated with an intrusive related style of mineralisation.

AXE Executive Chairman, Greg English commented: “This round of RAB drilling at Blue Hills was designed as a reconnaissance program across the strong surface soil copper anomalies that have been previously identified. The drilling program sought to establish whether the surface copper was also present in the bedrock.

“It is particularly encouraging that along each line of drilling over a strike of approximately 4.0km and 3.0km for Hood and Hawkeye respectively, we have intersected zones of anomalous copper within the bedrock. These outstanding results are another step in unlocking the large multi-kilometre scale copper systems at Blue Hills.”

The results from the RAB drilling program at Blue Hills are particularly encouraging, with copper in the bedrock having been identified over 3.7km, 3.0km and 1.4km of strike at Hood, Hawkeye and Katniss respectively.

The company has received a substantial amount of data from this program and is continuing the process of working through the information to enhance its understanding of the Hood, Hawkeye and Katniss prospects to help direct future exploration efforts. A preliminary review of the results, together with the existing extensive geochemical and geophysical datasets, has identified a number of new standout drilling targets and areas within the anomalies for follow up field work.