A total of 21 holes were drilled for a total of 676 drill metres and an average depth of 32 metres per hole.

By way of background, kaolin and halloysite are alumina-based clays that can naturally occur intermixed, and are part of a larger $3 billion construction materials industry in Australia.

These materials have recently emerged as a potential feedstock in processing high-value and hard-to-substitute high-purity alumina (HPA) that could be used in deep-tech applications such as light-emitting diodes and lithium-ion batteries, with halloysite having a nanostructure that may allow its use as an efficient catalyst in the petrochemicals industry.

Mineralisation closer to surface than expected

The exploration program was originally designed to drill 18 holes to an average depth of 47 metres for a total of 850 drill metres.

The kaolin was found to be closer to the surface than originally anticipated meaning that shallower drill holes were required.

All holes were drilled either adjacent to, or on, existing tracks to avoid the need to excavate new tracks, hence minimising costs.

The drill holes samples have been submitted to the laboratory for testing and assay.

Samples will be screened, assayed to determine kaolin grade and then analysed (X-Ray Diffraction (XRD)) to determine the halloysite content.

The following photos show rock chip samples from one metre intervals in a number of drill holes. 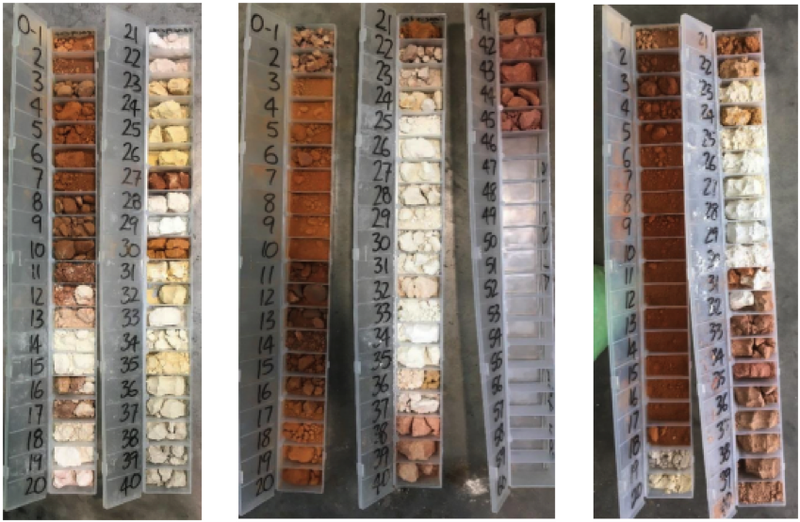 Results due in December

Results from all test work are expected in the next 2 to 4 weeks.

Commenting on the drill results and their significance in terms of pointing to a potentially cheaper mining operation, Archer executive chairman Greg English said, “We are very pleased with the results from our maiden drill program at Franklyn.

“The geological observations from the 21 holes drilled at Franklyn, confirm the presence and extent of the kaolin mineralisation previously reported by other explorers.”

Archer has calculated an Exploration Target at Franklyn in a range between 45 million tonnes and 91 million tonnes with grades between 30% and 36% Al2O3 (-45 μm size fraction).

The Franklyn Exploration Target is based on historical drilling, across 40 rotary drill holes and auger drilling was undertaken by the South Australian government between 1971 and 1992.

This historical drilling intersected substantial widths of kaolin mineralisation over an extensive area during the search for copper and gold mineralisation.