Apollo building on one million ounce resource at Lake Rebecca

Lake Rebecca already has a resource in excess of 1 million ounces and the group is undertaking a three-pronged strategy to grow the resource through step out and deeper drilling, as well as undertaking drilling where there is the potential for higher grade mineralisation within known pit shells.

Consequently, the latest round of results is important for the group, particularly in terms of identifying new prospects and strike extensions.

The delineation of 25 metres at 1.2 g/t gold followed by 15 metres at 1.4 g/t gold in a new prospect located just over 1 kilometre north-east of the group’s 180,000 ounce Duchess deposit is highly promising.

Similarly, a near-surface 10-metre intersection grading 7.7 g/t gold, including3 metres at 21.6 g/t gold at the Rebecca deposit bodes well for the company’s prospects of expanding the 775,000 ounce resource. 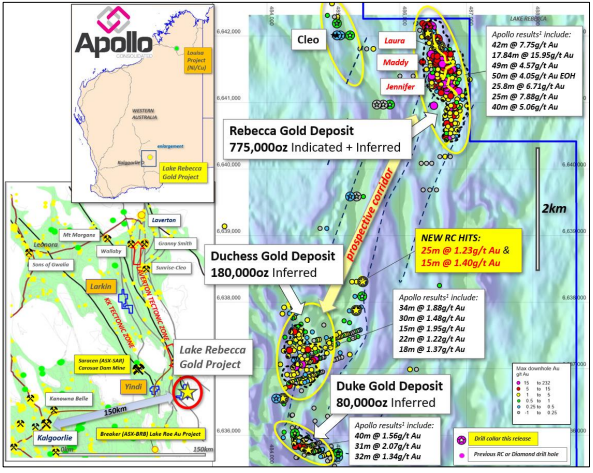 While step-down and infill drilling will be undertaken to build geological confidence in the orientation of the high-grade structures, the addition of shallow, higher-grade material in this part of the deposit will play an important role in future mining studies.

It is worth noting that the company is well-positioned financially to continue its aggressive exploration campaign with nearly $17 million in cash as at March 31, 2020 and US$4.5 million ready to be injected into the coffers following the sale of an asset in Côte d’Ivoire.

Given the company’s robust financial position, the size of its established resource and the potential exploration upside, its market capitalisation of about $70 million appears conservative.