Today’s results herald in the completion of the company’s phase 2 drilling program, with all results for the second diamond drill hole now collated and analysed. It also marks its third record drill result in a row with diamond hole CRP0017D expanding to 596m, a significant width expansion of 246m from the initial drill result.

The final result from CRP0017D demonstrates a robust large-scale distribution of copper and gold across the main porphyry (Cuerpo 3) at Cortadera which remains largely open both laterally and vertically. 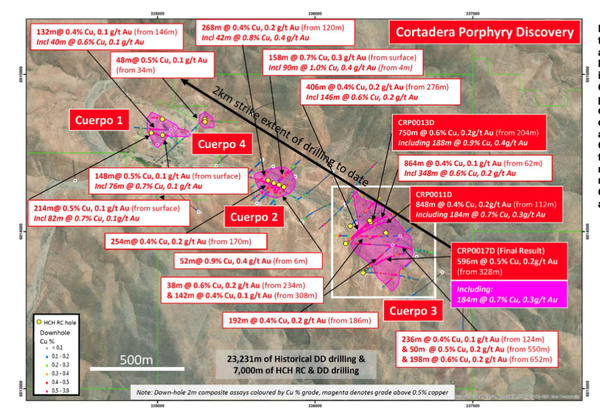 These results rate as rate as some of the worlds’ stand-out copper-gold porphyry drill results ever recorded.

Some of the more significant intersections include:

Its current drilling program is cementing this position.

All samples from this hole are currently being analysed with results expected shortly.

Hot Chili has also commenced work on a fourth diamond drill hole (CRP0019D) and is currently at a depth of approximately 434m down-hole.

So far, the drill hole has successfully intersected mineralised porphyry from 120m to 250m down-hole depth, with first results expected to be returned in the coming weeks.

Drilling across the recently discovered high grade zone at Cuerpo 3 will continue for the coming month in advance of the commencement of step-out drilling across each of the four porphyries at Cortadera.

Whilst results have been excellent, a further achievement is that Hot Chili has satisfied the first payment toward the 100% acquisition of Cortadera from SCM Carola.

This payment gives Hot Chili full access to expand its drilling program at Cortadera during the remaining two-year option term.