Shares in Minbos Resources Limited (ASX:MNB) increased more than three-fold at the start of year, and despite a retracement in the last month they are still up 300% since August last year.

Important news has come to hand today regarding support from the Angolan government, and this is also likely to see strong support for the stock.

MNB today announced that it has received approval for the exploitation of the Cabinda Phosphate Project, located in Angola.

Minbos won an international tender for the Cabinda Phosphate Project in 2020 based on producing Enhanced Phosphate Rock (EPR) as a substitute for fertilisers currently imported by the Angolan Government for distribution to wholesalers and farmers.

The company's goal is to build a nutrient supply and distribution business, that stimulates agricultural production and promotes food security in Angola and the broader Middle Africa region.

As an indication of the Angolan government’s understandably strong support for the project, the Ministry of Mineral Resources and Petroleum has approved the company's Mining Title, renewable up to 35 years, for the mining of phosphate at the Cácata Deposit as indicated below. 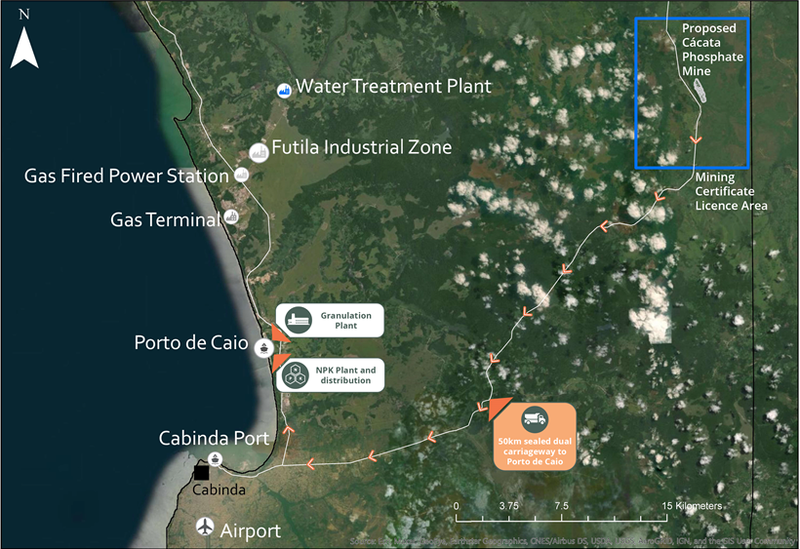 The exclusive mining rights have been granted over an 85 square kilometre area, including the designated project area, encompassing the Cácata high-grade phosphate deposit, proposed open-pit mine, waste and ore stockpiles, and all associated infrastructure required for the mining operations.

Commenting on the significance of this development, Chief Executive Lindsay Reed said, "To receive our Mining Licence less than two months after executing a Mining Investment Contract, usually a 3-5 year process, is a stunning confirmation by the Government of Angola of their commitment to support and accelerate our project.

"The company is now positioned to develop Angola’s first locally mined and manufactured fertiliser for sale into one of the most prospective growing regions globally."

Making Minbos even more attractive for both government and investor support is its adherence to environmental, social and governance principles (ESG), a factor that is becoming increasingly important in the investment decision-making process.

The Cácata deposit is a uniquely low-impact mining project with a relatively small environmental footprint and long operational life.

From a social perspective, production from the project will assist in addressing vital food supply issues in Angola and other Middle African regions.

The project's planned small open-pit operation measures less than 2 kilometres in length with the mining amenities positioned around the pit and close to a local workforce.

The mine is adjacent to the sealed dual carriage highway which is 50 kilometres from the proposed granulation plant at Port de Caio.

Another potential share price catalyst is imminent as the company’s environmental consultants Grupos Simples in Angola, HCV from South Africa mobilise to Cabinda in early April to complete a wet season base line environmental survey in the Mining License area.

Meanwhile, the DFS is the next of the key studies to be released, and management expects this to be completed by November.