In a development that underlines the strategic significance of Los Cerros Limited’s (ASX:LCL) Quinchia Project in Colombia, global mining group AngloGold Ashanti has entered into a binding terms sheet, exchanging its Chuscal joint-venture interest for Los Cerros securities, effectively making it a 4.3% shareholder in the group.

Managing director of Los Cerros Jason Stirbinskis pointed to AngloGold’s extensive experience in the region saying, “We welcome AGA to the share registry.

“They have proved to be supportive JV partners at Chuscal and we look forward to their ongoing support as a shareholder of Los Cerros.

‘’In addition to their vast knowledge of Colombian geology and gold discoveries, they have direct experience in the Quinchia region and some of our highest priority targets in the extensive Andes portfolio were also once AGA assets”.

The Agreement will take Los Cerros’ ownership of Chuscal to 100% and results in the company holding 100% of the entire Quinchia Project of which Chuscal is a part.

As indicated below, Chuscal is in a central position just to the south of the proposed Miraflores plant site. 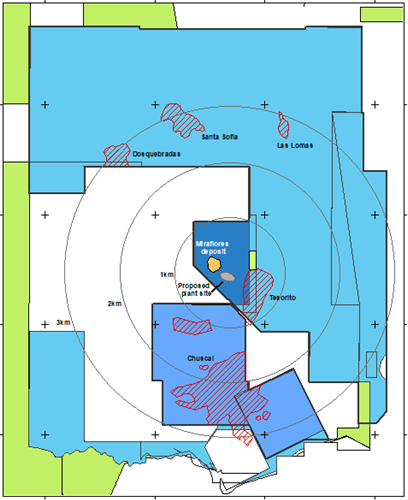 The recently completed maiden drilling program at Chuscal has sharpened the company’s belief that Chuscal is a critical element in the regional scale Quinchia Gold Project which already hosts three other discoveries in Miraflores, Tesorito and Dosquebradas, all within a 3 kilometre radius.

Consequently, management holds the view that controlling Chuscal and having discretion over how the larger opportunity presented is explored and developed is of substantial strategic importance and benefit.

In a similar vein, AngloGold Ashanti now has exposure to the larger Quinchia Project and the enormous greenfield potential of the Andes Project, 70 kilometres to the north.

All of these projects are located within the highly prospective mid-Cauca porphyry belt that hosts many multi-million ounce discoveries, some owned and discovered by AngloGold such as the Nuevo Chaquiro and La Colosa projects which have a combined gold equivalent resource of 55 million ounces.