Such a diversified asset base is difficult to find, particularly among emerging players.

What makes WML an even rarer commodity is the quality of its assets which are mainly located in areas where there are high profile projects being operated by leading mining groups.

Management has acquired proven territory and undertaken exploration that has identified a diversified range of metals in areas where they are traditionally found, and geological trends typically support the presence of such commodities.

I caught up with managing director Gerard Anderson at the Noosa Mining Conference, and we discussed the company’s strategy in terms of conducting a focused exploration campaign, as well as his approach in terms of prioritising the group’s various activities.

However, it is important to first gain an understanding of WML’s project portfolio, particularly in terms of appreciating management’s ability to extract optimum value from a high profile asset base.

Woomera’s assets include tenements in the Musgrave Province of South Australia, and the company also has tenements in the Gawler Craton which are considered prospective for uranium rich iron oxide copper gold (IOCG), as well as copper, nickel, cobalt, precious metals and rare earths.

As one of the most prolific mining regions in Australia and host to major projects such as Olympic Dam, the inclusion of Gawler Craton assets in WML’s portfolio should come as no surprise given management’s proven ability to snare premium sites in highly prospective regions. 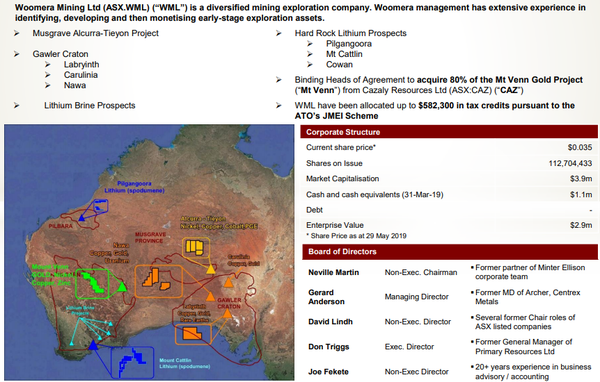 However, it has been the recent acquisition of an 80% interest in the Mt Venn assets that has really caught the market’s attention.

The Mt Venn gold and nickel project is 125 kilometres from the township of Laverton in the north eastern goldfields of Western Australia.

The high grade mineralisation delineated at Mount Venn in the course of historical exploration is well documented, but before going there it is worthwhile gaining an understanding of the process that led to WML gaining an 80% stake in the gold tenements.

On 23 May, WML signed a heads of agreement providing the framework to purchase an 80% interest in Cazaly Resources Ltd’s Mount Venn gold tenements.

Under the terms of the agreement which is expected to be finalised by September, WML will acquire 100% of the shares in Yamarna West, a wholly-owned subsidiary of Cazaly which held the tenements.

However, there has been another significant chapter added to this story with WML advising this week that according to the DMIRS register, the amalgamation applications have been granted and the areas the subject of P38/4149-4151 and P38/4195 are now part of E38/3111.

The two tenements E 38/3111 and E 38/3150 cover 50 kilometres of strike of the Mt Venn Greenstone Belt providing Woomera with a dominant land position that represents more than 90% of the belt.

The Gruyere deposit has a resource of 6 million ounces, and as Gold Road has progressed the project in the last six months the company’s shares have more than doubled, spurred on by a buoyant gold price.

However, for an emerging company like WML it is worth taking a look at where Gold Road was trading when it discovered the Gruyere deposit in October 2013 the group was trading in the vicinity of 9 cents per share, not far from its 10 year low.

With the four expired Prospecting Licences covering the Chapman’s Reward gold prospect at Mt Venn now having been amalgamated into E 38/3111, WML has brought further territory under its banner that has historically delivered near surface fine visible gold quartz veins up to 5 metres.

There are several gold targets that could be drilled once Heritage Clearances are completed. 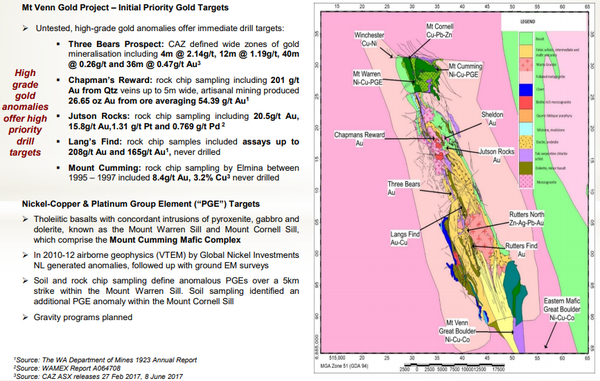 Aside from Chapman’s Reward, the latter is one of Anderson’s key targets as exploration has defined a major five kilometre corridor of coincident, soil, auger and historic drilling anomalism at Three Bears.

Anderson sees numerous similarities between Three Bears and Gruyere, and it will be one of the phase 1 high priority drilling targets in the group’s October/November exploration campaign.

Anderson said that WML’s exploration campaign at Mount Venn wouldn’t alter the group’s commitment to continue its planned exploration of other key projects.

In addition to drilling at Mt Venn, the plan for fiscal 2020 is for drilling to be undertaken at the Alcurra-Tieyon Project in the Musgraves and drilling in the Gawler Craton at Labyrinth. 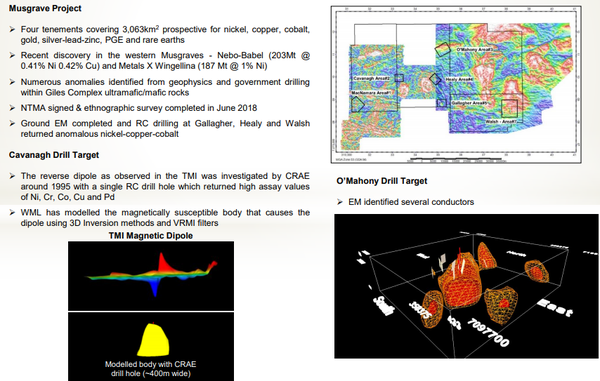 There is also the potential for drilling at Nawa and management intends to actively explore the Pilgangoora Lithium Project. 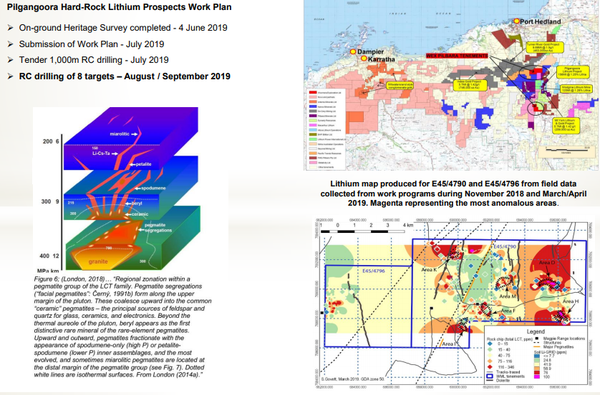