This development saw the company’s share price increase more than 50% from the previous day’s close of 14 cents to a high of 22.5 cents.

While this level hasn’t been sustained, this can arguably be attributed to the broad-based sell-off that has occurred in global equities markets.

At this stage, though, it is important to focus on the financial metrics of the DFS rather than share price gyrations, given that the fundamentals (as outlined below) point to an extremely lucrative project. 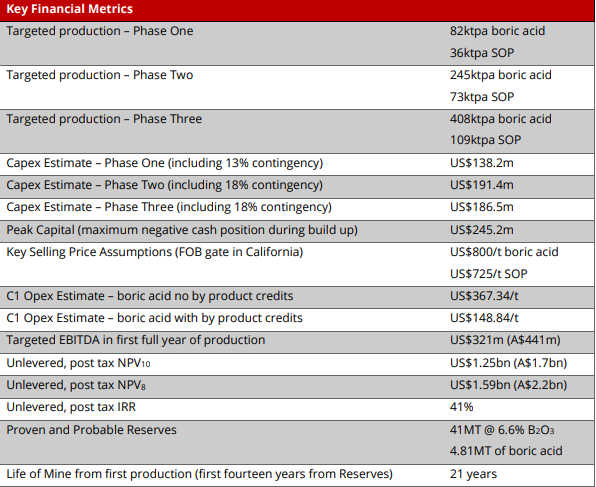 Pricing assumptions and other data appear conservative with boric acid currently fetching around US$900 per tonne compared with the US$800 per tonne used in the DFS.

This implies strong margins relative to the DFS estimated operating costs of approximately US$370 per tonne prior to taking into account by-product credits, with the latter significantly reducing costs to around US$150 per tonne.

American Pacific Borate is targeting a substantial EBITDA of $441 million in its first full year of production, which makes Fort Cady a significant mining project in a low risk, supportive jurisdiction. 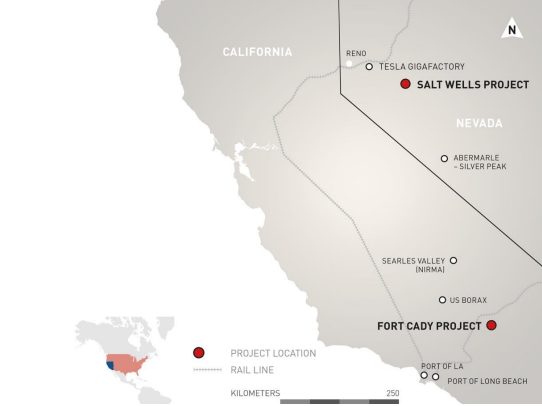 Other key metrics include a post-tax net present value of $1.7 billion based on a discount rate of 10%.

The DFS points to a mine life of 21 years with a post-tax internal rate of return of 41%.

The capital expenditure required to deliver phase 1 of the project is US$138.2 million, and management expects to start construction in the December quarter of 2019.

Important upcoming milestones include progressing financing discussions, obtaining permits and the commencement of detailed engineering, while the company will also be working towards decoupling SOP operations from the broader project.

The following schedule sets out the company’s goals, while also providing investors with an indication of the timing of potential share price catalysts.

Phase 1 production, which is scheduled for the second half of 2020, will be an important milestone.

As a backdrop, over US$50 million has been spent on the Fort Cady Project, including licence acquisition, drilling and resource estimation (non-JORC), well testing, metallurgical testing, feasibility studies and pilot plant infrastructure.

In addition, the project has previously obtained all operating and environmental permits required for commercial solution mining operations.

Duval Corporation evaluated the Fort Cady deposit in the late 1970s and early 1980s, completing over 30 diamond drill holes upon which the maiden non-JORC Resource Estimate was defined.

American Pacific Borate upgraded the resource in the first half of 2018.

Harking back to previous exploration initiatives, an additional 17 production wells were completed following the 1970s/1980s drilling campaign, and these were used for injection testing and pilot-scale operations.

This historical information is important as Mountain State Minerals was using the same injection fluids that American Pacific Borate is proposing to use.

Approximately 450 tonnes of boric acid was produced via solution mining of the colemanite ore body.

Given the promising results of the pilot-scale tests, concentrated permitting efforts for commercial-scale operations began in early 1990.

Final approval for commercial-scale solution mining and processing was obtained in 1994.

This included a second phase of pilot plant operations between 1996 and 2001, during which time approximately 1,800 tonnes of a synthetic colemanite product (marketed as CadyCal 100) was produced.

Commercial-scale operations were not commissioned due to low product prices and other priorities of the controlling entity.

American Pacific Borate executed a share purchase agreement with the project vendors (Atlas Precious Metals Inc.) in May 2017 to purchase 100% of what is now shaping up as a highly viable producing asset.

Management recently highlighted global supply and demand data from multinational borate producers, as well as commentary from analysts which indicates that the mineral remains an important industrial ingredient for modern society with demand expected to continue to grow.

There are very few substitutes for borates, especially in high-end applications and the resilient agricultural industry.

These key markets in particular are expected to grow as global population increases and a new middle-class emerges in previously impoverished countries with large populations.

The dynamics are also helped by a significant divergence of demand for borates driven by the construction and glass industries.

It is expected that China will continue to be the key market for growth, but additional demand is expected within the US, India and the European Union.

Borates tend to be a high-margin industry, but key factors for success are B2O3 grade, the ability to mine and mine proximity to infrastructure - areas where American Pacific Borate has a distinct advantage.

In the absence of boron resources across Asian countries and taking into account the constant and growing demand for its glass and ceramics, borate producers should continue to benefit from increasing demand.