Shares in Amani Gold Limited (ASX:ANL) doubled on Thursday morning after the company announced a substantial upgrade of the Kebigada gold deposit, part of the Giro Gold Project located in the Democratic Republic of the Congo (DRC).

Consistent gold exploration by the Klaus Eckhof chaired Amani at its Giro Gold Project at Kebigada and Douze Match continues to provide ongoing success in terms of gold exploration results and project scale.

Commenting on this development, Amani’s technical director Grant Thomas said, “The new MRE upgrade for Kebigada at over 4.1 million ounces gold is a milestone for Amani and confirms our strategy of targeted deeper drilling.

‘’Kebigada, even now, remains open at depth along the entire strike of the orebody. ’We believe we have a major gold deposit here at Giro, and Amani now has a very solid resource base to move to our aim of significant gold production from a new African gold mine.”

The Giro Gold Project comprises two exploration permits covering a surface area of nearly 500 square kilometres and lies within the Kilo-Moto Belt of the DRC, a significant under-explored greenstone belt which is shown below hosts Randgold Resources’ 17 million-ounce Kibali group of deposits within 35 kilometres of Giro. 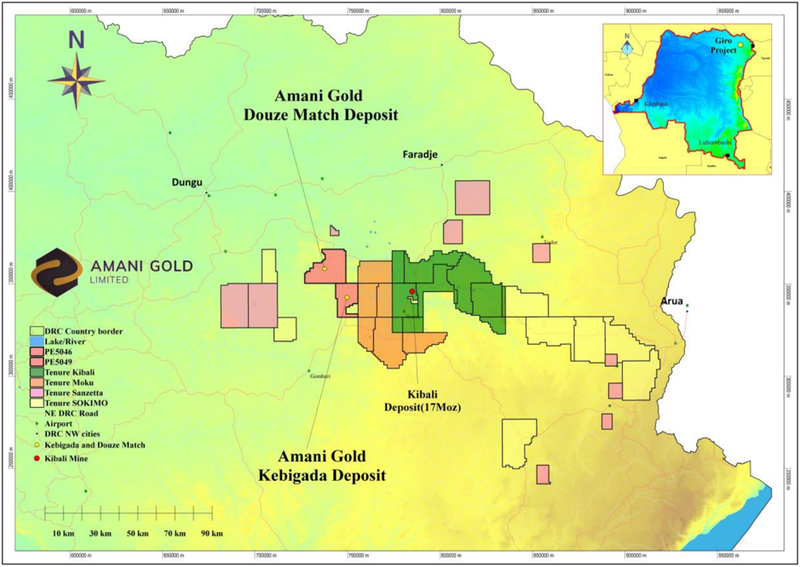 The nearby Kibali Gold Project produces in excess of 600,000 ounces of gold per annum.

The Giro Gold Project area is underlain by highly prospective volcano-sedimentary lithologies in a similar structural and lithological setting as the Kibali gold deposits.

The Giro Gold Project including both the Kebigada and Douze Match deposits now exceeds 4.4 million ounces of contained gold.

There has been limited mining of the upper part of the Kebigada deposit.

This is reflected in “No Sample” intervals in the drilling, which were used to generate an indicator model that identified the proportion and location of voids in the model.

Tonnage and grade in the model were then depleted assuming that the highest-grade material was preferentially removed.

The Kebigada MRE at a gold cut-off grade of 0.5 g/t has a strike length of approximately 1.4 kilometres and a horizontal width up to 400 metres.

The MRE starts at surface and is reported to a maximum depth of 300 metres.

The resource estimates at a gold cut-off of 0.5 g/t are shown below.

The preferred gold cut-off grade of 0.5 g/t assumes that mineralisation can be mined economically at this grade in an open pit, based on the current metal price.

The resource estimate was validated in several ways, including visual and statistical comparison of block and drill hole grades, examination of grade-tonnage data, and comparison with the previous model.

The new model indicates several areas where mineralisation is not closed-off and may continue, including at depth along the entire strike of the orebody and the western edge of the deposit.

Limited metallurgical testwork demonstrates that higher grade mineralisation from Kebigada is amenable to CIL only or combined CIL and gravity recovery.

Diamond drill holes GRDD034 and GRDD035 which are 240 metres apart have both outlined high-grade gold mineralisation deeper than previously intersected at the Kebigada deposit.

These gold assay results and the current Kebigada MRE indicate the potential for the Kebigada deposit to substantially grow via targeted deeper drilling along the entire strike of the orebody.

Amani plans to complete 200 metre spaced drilling north and south of drill holes GRDD034 and GRDD035, as well as similar spaced drill holes along the western edge of the deposit.

The much anticipated drilling campaign planned to commence in May/June will involve 12 core holes, each nominally 500 metres in length for a total of 6,000 metres.