Amani ready for another run

Last week Finfeed highlighted the prospects of Amani Gold Ltd (ASX:ANL) as its shares soared more than 30% ahead of the finalisation of an acquisition and an extensive exploration program.

Funds raised from a recent placement will be used to conduct a diamond drilling campaign in the Giro Gold Project in the Democratic Republic of Congo (DRC).

This follows the signing of a Memorandum of Understanding with Bon Génie N. Mining (BN Mining) Sarl to acquire 10 highly prospective gold Exploration Permits in the DRC through an 85.7% interest in BN Mining.

The Exploration Permits are collectively known as the Gada Gold Project and as shown below are located approximately 80 kilometres west of Amani‘s Giro Gold Project. 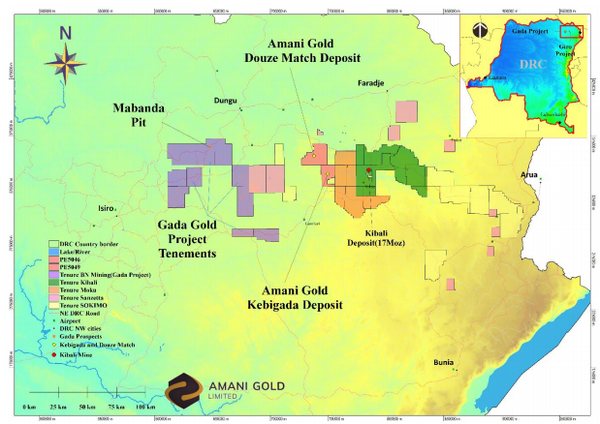 With regard to location, the close proximity to the 17 million ounce Kibali gold deposit is extremely significant, and this has no doubt sparked investor interest.

Management confirmed in the quarterly that it continued to conduct legal and technical due diligence, and should it add the Gada Gold Project to its portfolio an initial 1500 metre drilling program would commence in August/September.

Amani has outlined a gold resource at Kebigada within the Giro Gold Project of 45.6 million tonnes at 1.5g/t gold for 2.1 million ounce gold at a cut-off grade of 0.9g/t gold.

Amani has also outlined a gold resource at Douze Match within the Giro Gold Project of 8.1 million tonnes at 1.2g/t gold, for 320,000 ounces of gold at a cut-off grade of 0.5g/t gold.

Given Amani’s modest market capitalisation of $16 million, it would appear that the value of its resource and the exploration upside isn’t fully factored into the company’s share price.