The Klaus Eckhof chaired Amani Gold Limited (ASX:ANL) has completed a bookbuild for a two tranche placement to sophisticated and professional investors to raise up to $2.55 million. The placement will fund ongoing exploration activities at the company's Giro and Gada gold projects in the Democratic Republic of Congo (DRC), as well as meeting ongoing working capital requirements.

Up to 2,550 million fully paid ordinary shares will be issued at a price of 0.1 cents per share (placement shares), raising up to $2.55 million before costs.

Subject to receipt of shareholder approval, each placement share will include 1.5 free attaching listed options, with each having an exercise price of 15 cents and an expiry date three years from date of issue.

Commenting on how the funds will be applied, managing director Jacky Chan said, “This drilling program is a significant step forward for Amani and with it we aim to establish a significant transition stage for the company.

‘’Amani welcomes the support demonstrated for the Placement by existing shareholders and new investors of the company.

‘’The funds will enable Amani to continue to grow the Kebigada deposit over the current 4.1 million ounces gold (0.5g/t gold cut-off grade) and rapidly progress targets to drill stage at Gada”. 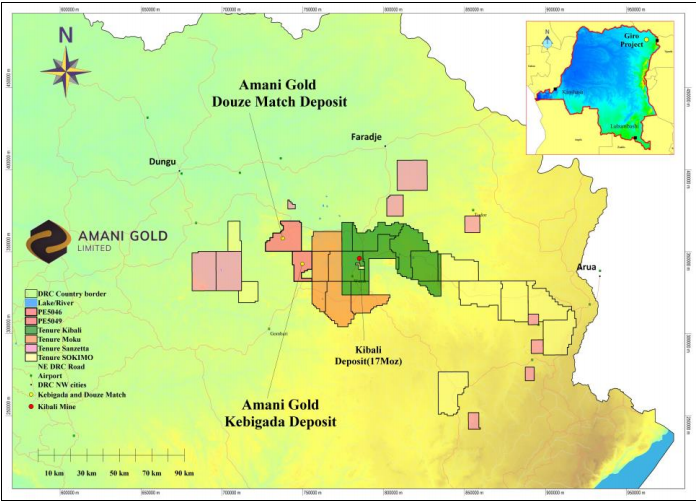 The Giro Gold Project is located in proven territory, and the significantly underexplored greenstone belt which Amani will be targeting hosts Randgold Resources’ 17 million-ounce Kibali group of deposits within 35 kilometres of Giro.

The nearby Kibali Gold Project produces more than 600,000 ounces of gold per annum.

Drillholes GRDD034 and GRDD035 are 240 metres apart and both outlined high-grade gold mineralisation deeper than previously intersected at the Kebigada deposit.

These gold assay results indicate the potential for the Kebigada deposit to substantially grow via targeted deeper and along strike drilling.

The planned drilling campaign will involve four core holes, each nominally 500 metres in length for a total of 2,000 metres and is expected to commence in August 2020.

The Gada Gold Project consists of six Exploration Permits namely 11796, 11797, 11798, 11800, 11816 and 11817, totaling of 1,831 square kilometres, located in the north-east of the Democratic Republic of Congo within the Niangara, Dungu and Rungu Territories of the Haute Uele Province with Isiro as the Provincial Capital.

As indicated below, the Gada permits lie approximately 80 kilometres to the west of Giro. 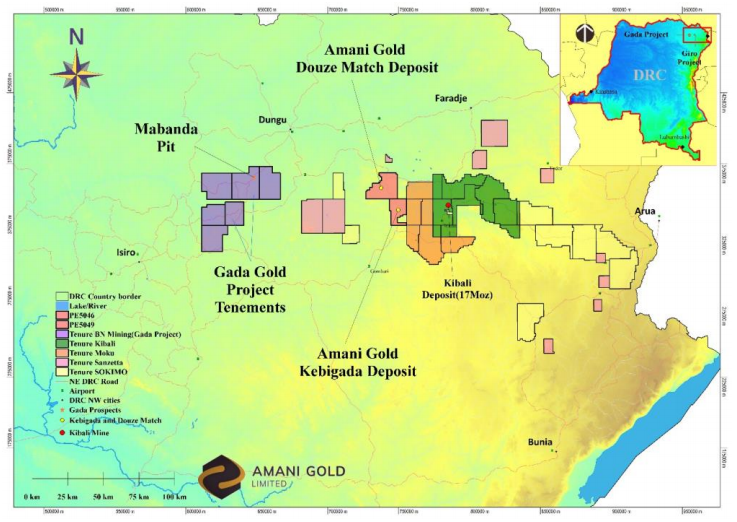 The Gada Project area has complex transfer faults that could host gold deposits at the intersections.

The porphyritic granites also show some micro-folding and faulting which gives an indication of the general structural setting within the area.

Artisanal miners have mined quartz veins and associated structures at many places within the Gada Project area.

Typically, high gold grades are mined by the artisanal miners, but they have been unable to carry out mining below approximately 40 metres due to flooding and the inability to dig through hard fresh rock.

Phase 1 Sampling is expected to start in early July 2020, and Phase 2 sampling will infill the priority area.

Soil sampling results at Gada will determine the location of an initial 5000 metre reverse circulation drilling campaign which is expected to commence in October 2020.