Amani Gold Ltd (ASX:ANL) announced on Monday that it had commenced exploration at the highly prospective Gada Gold Project in the Democratic Republic of Congo (DRC).

The board and management today confirmed their view that the Gada Gold Project offers a significant opportunity for value enhancement. Given the location, geology and scale of the tenement package, as well as the early stage assessment carried out across the project, it is clear that the package is highly prospective for gold mineralisation.

Local artisanal gold mining has been undertaken for many years within shallow pits of depth to generally less than 10 metres.

Best results from initial due diligence include:

Underlining the importance of collaborating with the group’s existing partner at Giro, Amani’s managing director Jacky Chan said, “Amani has completed due diligence on the Gada Gold Project and we now look forward to aggressively exploring the ground under a new MoU with project owner SOKIMO, our JV partner for Giro.

The proximity of the two projects is illustrated in the following map. 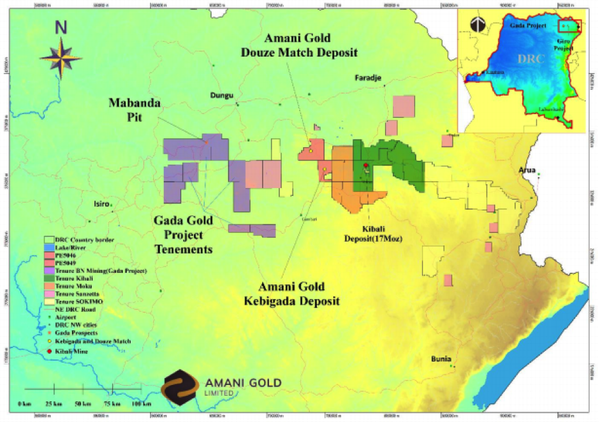 Cash and equity for Gada acquisition

On signing the MoU, Amani has agreed to settle outstanding Surface Rights payments due to DRC Cadastre Minier (CAMI) of approximately US$315,000.

In addition, Amani has agreed to pay SOKIMO the sum of US$300,000 for exploration data, the rights to explore, prospecting authorisations and administrative expenses during the MoU period.

Further to the agreement with SOKIMO, Amani has also agreed, subject to shareholder approval, to issue 30,000,000 shares as an introduction fee to Mark Gasson and a further 10,000,000 shares to Mazoka Resources (PTY) Limited for assistance in concluding the MoU on the Gada Gold Project.

As part of the initial technical due diligence of the Gada tenements site visits and rock chip and channel sampling of known gold occurrences, artisanal pits and mineralised outcrops were completed within tenement PR11816.

The following summarises some of the rock chip and channel samples that were identified in the prospects and the artisanal pits that the group examined.

Exploration to include 23,000 soil samples

Initial exploration activities have been planned for Gada tenements PR11816, PR11817 and PR11797 to cover the known prospects from Mazizi Pit in the south, through Mbugo, Mabanda, Munguba, Arakaki and Mundial to Mangbetu Pits in the north as indicated below. 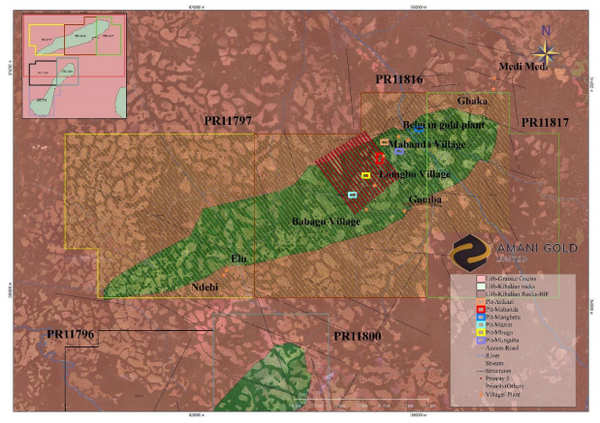 Conventional soil sampling will be carried out over the prospect areas on a nominal 400 X 100 metre grid for a planned total of 22,904 samples.

Priority soil sampling will target gold mineralisation at Mazizi, Mbugo and Mabanda areas and will be completed first, for a planned total of 1,193 samples.

Initial priority RC drilling will target near surface gold mineralisation at Mabanda Pits for a planned total of 21 holes for approximately 1,150 metres.

This area consists of a number of several open pits across a strike length of approximately 900 metres.