Shares in Amani Gold Ltd (ASX:ANL) surged 20% on Wednesday under all-time record volumes, arguably in anticipation of the group’s imminent drilling campaign in the Democratic Republic of Congo (DRC).

In May, the company raised $3 million through the issue of 1.5 billion fully paid ordinary shares at $0.002 per share, and the company is now trading at a 50% premium to the placement price.

The funds raised will be used to advance the Giro Gold Project in the DRC which will include diamond drilling.

Funds from the placement will also cover regional exploration and field costs and geophysics and mining studies, as well as financing due diligence on the potential Gada acquisition which we will discuss in more detail later.

Importantly though, this is a transformational period for Amani as it plans to accelerate drilling and exploration programmes across its highly attractive gold project portfolio, particularly given that its assets are in the heart of DRC gold territory.

On this note, chairman Klaus Eckhof said, ‘’We know the geology and mineralisation have been proven at Giro, and we know how to explore and discover gold deposits in this part of the DRC.

‘’The acquisition of this package would see Amani as one of the major gold tenement holders in DRC in a proven gold producing region nearby to the 600,000 ounce per annum gold mine at Kibali.”

The location of these two prospects is indicated below. 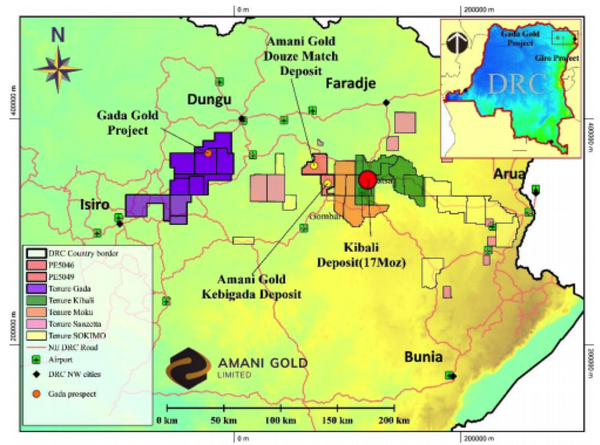 Drilling at the Giro Gold Project is expected to commence in shortly and consist of approximately 3500 metres.

If the Gada Gold Project is added to the potfolio, Amani expects to carry out an initial 1500 metre exploration drilling program commencing in August.

Amani is considering purchasing and operating a combined RC/diamond core rig to carry out the majority of planned 2019 drilling.

It is anticipated that an owner operated drill in the DRC will significantly reduce drill costs and aid logistical flexibility in relation to exploration programs.

Amani has signed a Memorandum of Understanding with Bon Génie N. Mining (BN Mining) Sarl, to acquire ten highly prospective gold Exploration Permits in the DRC through an 85.7% interest in BN Mining.

Given the location, geology and scale of the tenement package, as well as the early stage scouting carried out across the project, in management’s view it is clear that the package is highly prospective for large gold mineralisation. 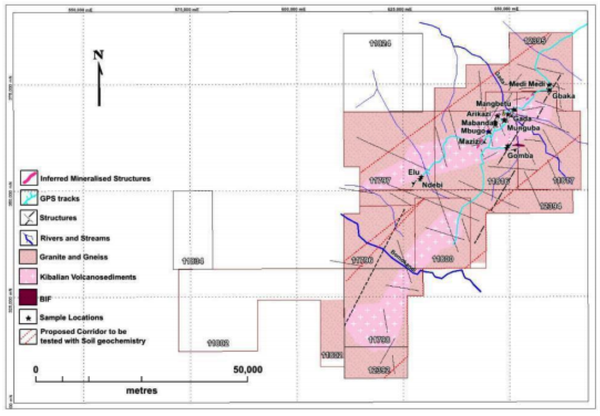 Local artisanal gold mining has been undertaken for many years within shallow pits of depth to generally less than 10 metres, and miners have identified quartz veins and associated structures at many places within the Gada Project area.

Typically high gold grades are mined by the artisanal miners, but they have been unable to carry out mining below approximately 40 metres due to flooding and inability to dig through hard fresh rock.

Consequently, Amani has several strings to its bow, and with drilling occurring across a number of sites over the next six months there is scope for further share price momentum.