Altilium Metals acquisition would be transformational for Aldoro

It makes interesting reading, particularly for investors targeting companies that provide diversified exposure across the precious and base metals areas.

With the company having entered into a binding option agreement to acquire Altilium Metals Ltd in September, it could be deemed that the quarter was one of the most important in Aldoro’s history.

However, it is important to note some other significant developments that occurred during the period, in particular progress at the Ryan’s Find Project and the Leinster Nickel Project.

To put this quarter into perspective, the largest daily volumes in the company’s history were recorded when the agreement with Altilium Metals was struck.

Also, the company’s shares traded as high as 21.5 cents, the highest level since the company listed September 2018.

This was followed by large-volume trading in mid-October as the company announced that it had recommenced drilling at Leinster, and on October 14 Aldoro once again revisited the 21.5 cent mark.

Importantly, this ground has not undergone prior drilling, and with assay results due in three weeks there could be further share price catalysts in the wind.

It is worth noting that Aldoro provides strong exposure to nickel through its established Leinster and Cathedrals Belt projects, but also Altilium presents opportunities such as the Narndee Igneous Complex (nickel-copper-platinum group metals) and the Windimurra Igneous Complex which is also prospective for nickel, copper and platinum group metals, as well as lithium.

While the following chart which spans the period from 1995 highlights nickel’s stunning performance over the last five months, increasing from less than US$12,000 per tonne to about US$18,000 per tonne, a gain of 50%, it also shows that there could be further upside.

By comparison, nickel has pushed up to around the US$25,000 per tonne mark on a few occasions since the bubble burst as the global financial crisis unfolded.

Having established that Aldoro is definitely going through a period of transformation and has exposure to in-favour metals, it now comes down to the company successfully executing on a portfolio of assets that investors have without doubt given a tick of approval.

In terms of commodities exposure though, the addition of gold assets is a real plus for Aldoro.

While base metals tend to perform well when markets are robust and global economies are cranking, a reversal of those conditions often places downward pressure on commodity prices.

Conversely, during periods of volatility and/or economic duress investors often opt for gold as a safe haven investment.

Consequently, Aldoro’s diversification makes it a company for all seasons.

Interestingly, at present it is benefiting from both the burgeoning nickel price and a strong Australian dollar gold price.

Gold was all the rage when it was up around US$1550 per ounce, but it really only stayed at that level for a short period of time, and for the best part of the last five months it has traded in the vicinity of US$1500 per ounce, which is where it currently sits.

Investors appeared to be spooked by a dip in late September early October, but that was short lived.

It is also worth noting that since mid-July the Australian dollar has slumped from more than US$0.70 to approximately US$0.67.

While it has rebounded in the last month to around US$0.69, this still implies an Australian dollar gold price of $2200 per ounce.

Average production cost for Australian gold producers are in the vicinity of $1300 per ounce, implying a healthy margin of $900 per ounce.

The following chart shows the substantial decline in the Australian dollar against the US dollar over the last two years.

Altilium holds a series of advanced exploration projects in the Murchison Region of Western Australia including the Penny South Gold Project in the Youanmi Gold Mining District and the multi-commodity Narndee Project Area. 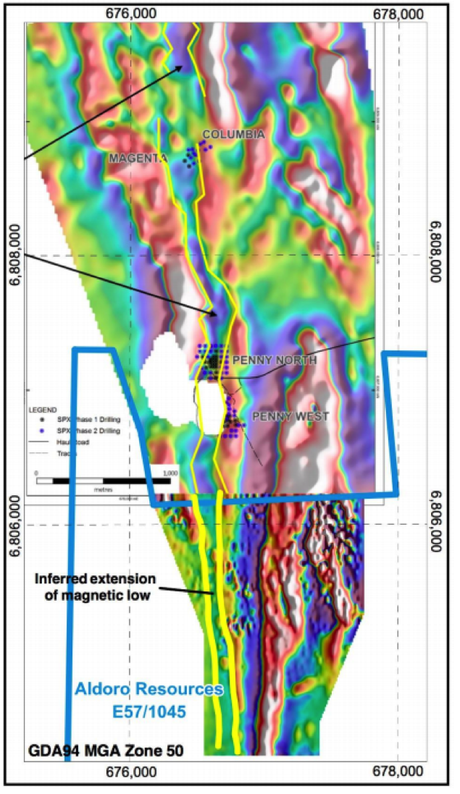 Historic drilling within tenement E57/1045 (southern extent of the above map) has encountered various significantly anomalous intersections of gold mineralisation including 2 metres at 34 g/t gold and 6 metres at 1.3 grams per tonne gold. 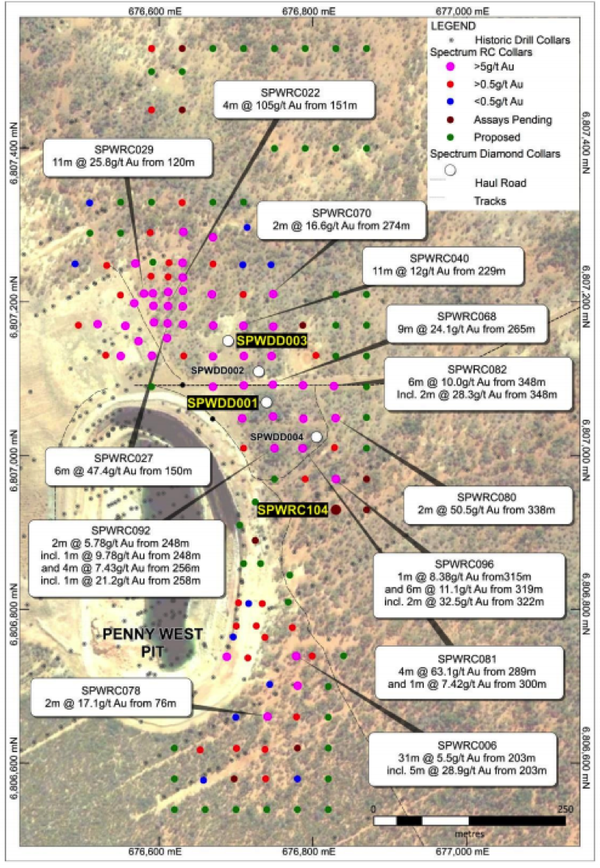 It was just in the last fortnight that Spectrum declared a maiden mineral resource estimate for the Penny West project of 799,000 tonnes at 13.8 g/t gold for 355,500 ounces.

Penny South has the potential to drive Aldoro’s shares higher once the company starts to deliver drilling results.

Also, watch out for the release of a more detailed drilling report in relation to the company’s exploration activities at Leinster.

Management expects that further exploration at Leinster will focus on geochemical and stratigraphic targets.

The company is focusing on the nickel sulphide potential of the Ryans Find Project, in particular the area previously explored by Neometals (ASX:NMT) as it established that the Green Dam ultramafic complex which underlines the Ryan’s Find Project was formed in a single continuous eruptive event. 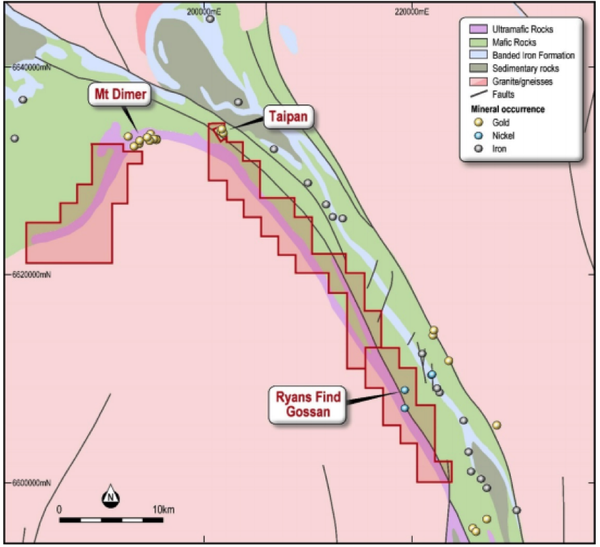 Such events give rise to the potential for nickel bearing sulphide mineral accumulations to form, and then be further concentrated by magmatic processes.

While investors following Aldoro’s progress may see some activity around the Ryan’s Find Project, it would appear that a significant focus will be on the Cathedrals Belt Project, 250 kilometres north-west of Kalgoorlie, adjacent to nickel sulphide discoveries made by St George Mining Ltd at the Cathedrals, Strickland and Investigators Prospects.

The project can be seen lying towards the South West corner of the following map, and to the east and west of St. George’s Cathedrals prospect. 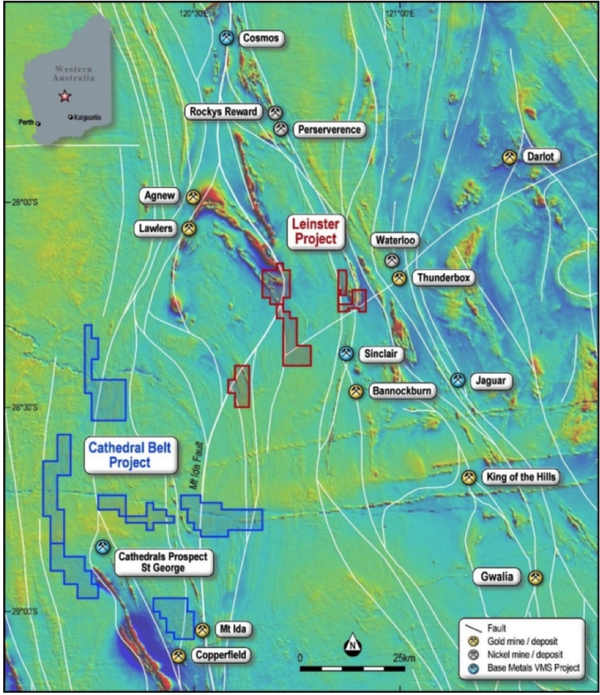 Aldoro’s interpretation based on its own high resolution aeromagnetic survey is that the greenstones hosting St. George’s nickel-sulphide mineralisation extend into Aldoro’s tenure.

The group’s tenement E29/1030 is interpreted to lie directly along trend from the ultramafic units hosting the nickel-sulphide mineralisation at the Cathedrals, and aeromagnetic images show a discrete east-west magnetic feature in the south-west portion of E29/1030 as shown below. 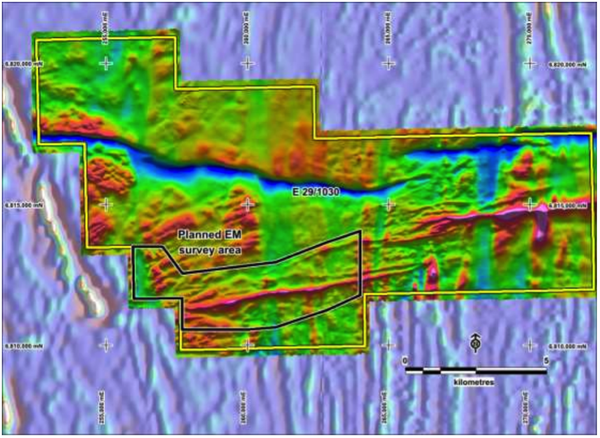 Aldoro will be conducting a ground moving loop electromagnetic (MLTEM) survey over an area of E29/1030, with a view to identifying whether any conductive zones potentially indicative of accumulations of sulphide minerals are associated with this identified feature.

GEM Geophysics will mobilise to site this week to commence the survey which is expected to take four weeks to complete.

Results will be available after survey data is processed and modelled, a potentially market moving development.

Given the significant strike rate of successful exploration initiatives in the broader area, positive news could be imminent.