Alicanto Minerals Ltd (ASX:AQI) has entered into an earn-in agreement with Nord Gold SE whereby Alicanto has granted Nordgold the exclusive right to acquire a 100% interest in the Arakaka Gold Project, Guyana.

Importantly, Nordgold has an outstanding track record in discovering and developing large-scale gold deposits in a number of regions, including South America.

The group has 10 producing mines in Burkina Faso, Guinea, Russia and Kazakhstan.

In terms of the agreement, Nordgold may earn up to a 100% interest in the Arakaka Project by fulfilling certain conditions.

The agreement would see Nordgold sole fund US$3 million in exploration expenditure within a one year earn-in period, and at completion of the earn-in period, pay an additional US$5 million to Alicanto as an “Earn-in Right”.

Alicanto would continue to operate the project during the first 12 months, and the drilling campaign would commence as soon as practicable with Nordgold required to spend a minimum of US$1.5 million.

If Nordgold terminates the agreement and ceases to make contributions at any time during the earn-in period the company will forfeit all rights and interests to the Arakaka Gold Project.

While this is a significant development in terms of progressing the Arakaka Gold Project, Alicanto has taken on another dimension since entering into an option and share sale agreement to acquire the Oxberg and Naverberg VMS (Volcanogenic Massive Sulphide) projects in Sweden. 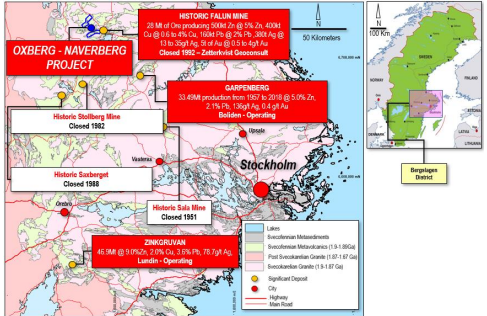 The area is highly prospective for zinc, lead, silver, copper and gold with the broader district home to world-class producing mines that feature impressive grades.

The company has immediate multiple walk up high grade VMS drill targets at Naverberg with rock chip samples including 26.1% zinc, 8.8% zinc and 2.4% copper.

Alicanto intends to explore the Oxberg and Naverberg Project area in the next 12 months following shareholder approval of the transaction.

Management plans to undertake data compilation, field mapping, and surface geochemical sampling ahead of proposed drilling in the second half of the year.

Following shareholder approval, Alicanto will now be delivering market sensitive news flow on multiple fronts, making it a stock to watch in 2019/2020.