Shares in Alicanto Minerals Ltd (ASX:AQI) spiked 8% on Monday after management announced the commencement of a large diamond drilling programme at the company’s 100% owned Arakaka Gold Project in North-West Guyana.

The drilling campaign is fully-funded under the Earn-In Agreement with Nord Gold SE as outlined by Finfeed in June.

Nordgold has an outstanding track record in discovering and developing large-scale gold deposits in a number of regions, including South America.

The group has 10 producing mines in Burkina Faso, Guinea, Russia and Kazakhstan.

The upcoming drilling program will include 12,000 metres of diamond drilling focused on the underexplored and highly prospective Arakaka Main Trend.

Diamond drilling is an expensive exercise and one would expect that Nord Gold sees the prospects of success as being relatively high to undertake such a campaign.

This wouldn’t have been a hard sell though on Alicanto’s part with outstanding previous intercepts from reconnaissance drilling including 13.5 metres at 7.4 g/t gold, 1.9 metres at 30.6 g/t gold and 48 metres at 1.8g/t gold.

Importantly, the thickest intercept was from surface and the other two were from relatively shallow depths of about 90 metres.

Commenting on the upcoming campaign and highlighting the broader geological features that are being targeted, Alicanto’s chief executive Peter George said, “The drilling at Arakaka Guyana represents the first time there has been targeted diamond drilling on the prolific gold producing Arakaka Main Trend.

The corridor George refers to, along with early stage drilling results can be seen in the following graphic. 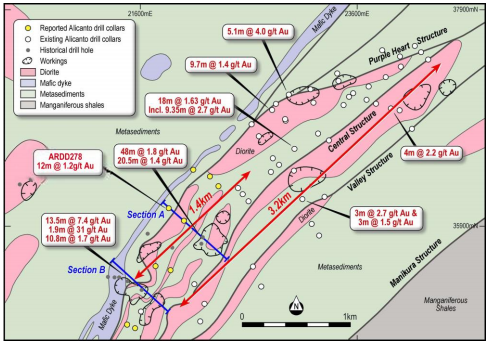