GEM Geophysics will conduct the survey, which will focus on a ground moving loop electromagnetic (MLTEM) survey over an area of E29/1030, which forms part of its Cathedrals Belt Project. 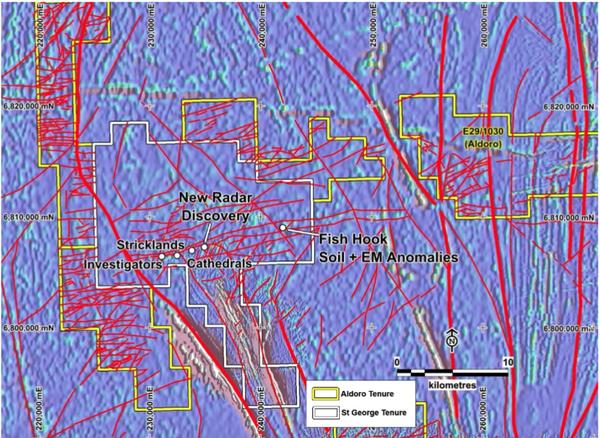 In good news for Aldoro, St George plans to drill its new Fish Hook Prospect in November. The expectation is this would potentially significantly increase the strike length of nickel-copper mineralisation identified across the Cathedrals Belt.

GEM Geophysics will mobilise to site this week to commence the survey which is expected to take 4 weeks to complete.

Results will be available after survey data is processed and modelled.

Whilst work at Cathedrals Belt is ramping up, Aldoro has also just successfully finished its maiden drilling program at the Leinster Nickel Project.

Leinster plays host to the Firefly prospect, where Aldoro has encountered a mixture of basalts (including high Mg), coarse-grained mafic and ultramafic lithologies.

The company encountered trace (<5%) sulphides associated with the ultramafic units, and more significant sulphide bearing intervals were dominantly pyrite (80%) and hosted by mafics.

Samples have been submitted to the laboratory with assays to follow shortly along with a more detailed drilling report.

The Sinclair Nickel Project contains infrastructure including a 200-person camp, mine buildings and workshops, a core yard, a two kilometres airstrip and quality water that can be reticulated to the Thunderbox plant.

Sinclair also includes a 350,000 tonnes per annum processing plant and mineral resources of 720,000 tonnes at 2.3 per cent nickel.