Aldoro Resources Ltd (ASX:ARN) has commenced its maiden drilling program at the Firefly Prospect, part of the Leinster Nickel Project in Western Australia.

The drilling program will test three high priority nickel sulphide targets that were delineated in the company’s 2018 ground electromagnetic survey.

Drilling is expected to take approximately 10 days, and assays should be known within six weeks.

While historical drilling hasn’t occurred at Firefly, the broader Leinster Nickel Project covers mapped and interpreted ultramafic units located along strike from Talisman Mining’s Sinclair Nickel Project and BHP’s Leinster Nickel Operations, which include the Perseverance, Rockys Reward and Venus deposits as shown on the aeromagnetic image below. 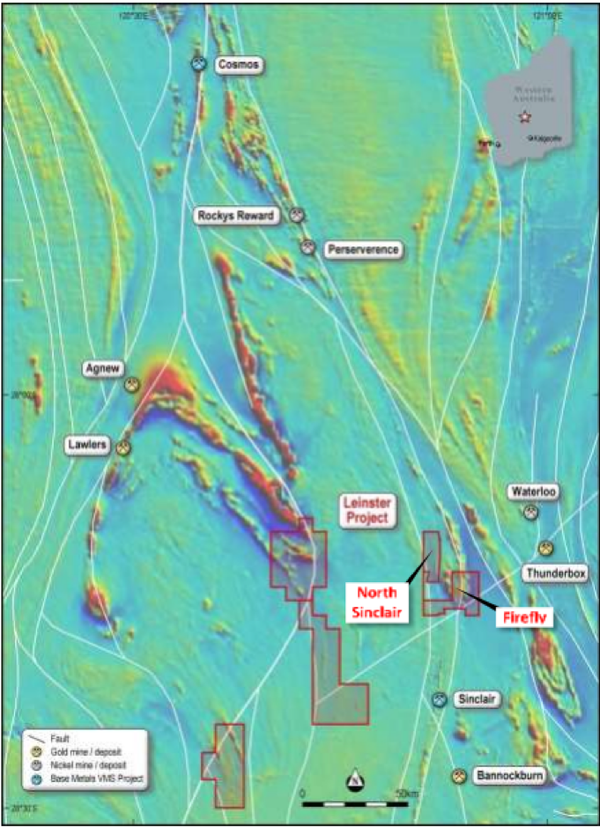 Typical of nickel mineralisation in the Eastern Goldfields

Drilling will test a series of bedrock conductors modelled within an intense, one kilometre scale electromagnetic (EM) anomaly which appears to be associated with the contact of a high magnetic response unit.

This anomaly was detected in the company’s high powered ground electromagnetic (EM) survey over the Firefly Prospect in December 2018.

Subsequent modelling of the anomalies and investigation of historical drilling has confirmed that three higher priority anomalies remain untested by drilling.

More specifically, the higher magnetic responses in the Firefly area have been determined in historical drilling to correlate to ultramafic units, recently confirmed by drilling by Talisman Mining at the Amy Rix Prospect adjacent to Aldoro’s Leinster Nickel Project.

From a geological perspective, management said that the highest priority targets lie within an embayment of the high magnetic response unit.

Such embayments are commonly hosts for sulphide accumulations in komatiitic basalt flows which are the setting for nickel mineralisation in the Eastern Goldfields.