Adriatic reports exploration results ahead of drilling at Vareš

Finfeed presents this information for the use of readers in their decision to engage with this stock. Please be aware that this is a very high risk stock. We stress that this article should only be used as one part of this decision making process. You need to fully inform yourself of all factors and information relating to this product before engaging with it.

Results are in from Adriatic Metals PLC (ASX:ADT) extensive geophysical and geochemical exploration on the Rupice prospect in its 100% owned Vareš Project in Bosnia and Herzegovina.

The Vareš Project comprises a historic open cut zinc/lead/barite and silver mine at Veovaca and Rupice, an advanced proximal deposit which exhibits exceptionally high grades of base and precious metals.

ADT’s short-term aim is to expand the current JORC Resource at Veovaca and to complete an in-fill drilling programme at the high-grade Rupice deposit. Encouragingly, the targets are adjacent to historical mining adits at Brestic-Jurasevac.

This style of exhalative mineralisation makes an excellent target for induced polarisation (IP) geophysical surveys where the presence of sulphides results in an increased “chargeability” anomaly against the host sediments.

Polymetallic lead-zinc-barite-silver-copper-gold mineralisation at the Rupice prospect within the Vareš Project is hosted in an exhalative deposit formed when ore bearing hydrothermal fluids were released into a marine environment resulting in the precipitation of stratabound metal sulphide mineralisation hosted within sedimentary rocks.

The IP survey indicates strong anomalous targets along strike and to the north and south of the 2017 drill hole locations of the Rupice using both Gradient Array and Pole-Dipole surveys.

The IP program used two different arrays; gradient array (GAIP) which allows for the rapid coverage of large areas, and pole-dipole array (PDP) which gives better depth resolution, allowing confirmation of the chargeability anomaly and defining a target for drilling. 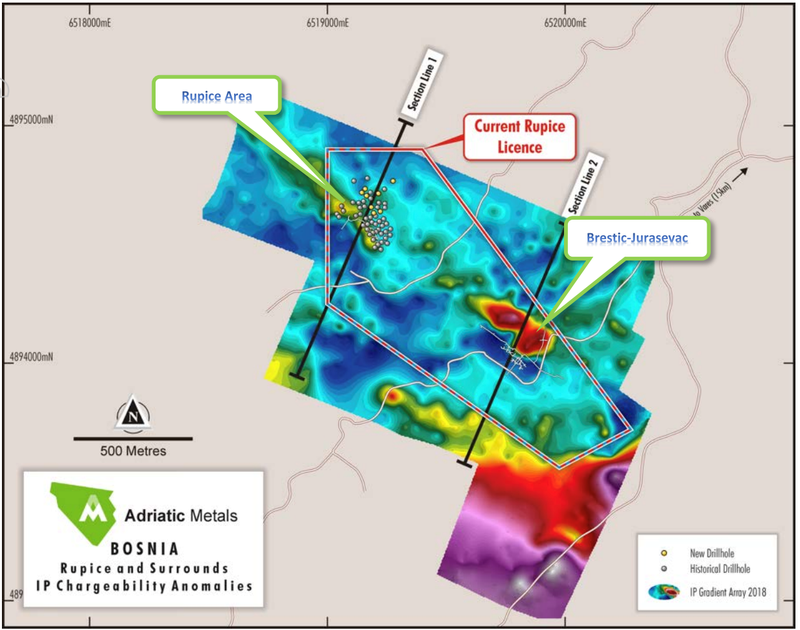 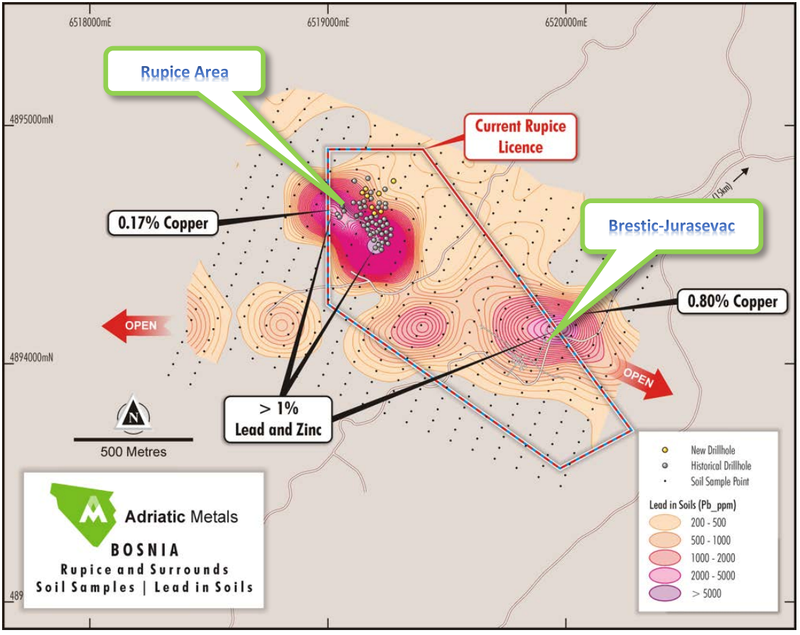 ADT’s CEO, Geraint Harris said, “the initial geophysics are well supported by the geochemistry results and align well with our drill tested understanding of the mineralisation at Rupice.

“The extent of the anomaly at Brestic-Jurasevac will be tested soon as we embark on a 15,000m drill programme designed to test the anomalies on our current project area, potentially demonstrating the mineralisation at the northern Rupice area connects to the southern Brestic-Jurasevac area, where adit sampling in the 1980s and 1990s demonstrated high grade mineralisation.

“Additionally, the anomalies to the west of our Rupice licence, further support our view that the Vareš Project sits within a mineralised corridor, and we will use this data to look for key areas to add to our existing concessions.”