Finfeed presents this information for the use of readers in their decision to engage with this stock. Please be aware that this is a very high risk stock. We stress that this article should only be used as one part of this decision making process. You need to fully inform yourself of all factors and information relating to this product before engaging with it.

Adriatic Metals PLC (ASX:ADT) has today announced the commencement of the first phase of a 15,000m diamond core drill program at the Rupice prospect.

Initial drilling will focus on the northern reaches of the area, which is within its 100% owned Vares` project in Bosnia and Herzegovina.

The 2018 program at the site will be broken into multiple phases. The first stage is geared towards targets in the Rupice north zone and will follow northerly extensions. The phase one drilling footprint will cover over 220m of strike length (up to the current licence boundary) and is expected to be circa 3,500m. 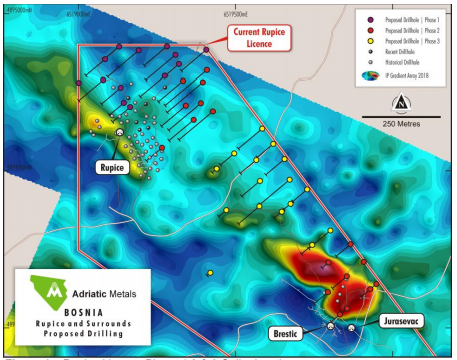 Historical works and drilling in 2017 have intersected exceptional high grades of base and precious metals from the north extension of Rupice.

Recent geophysical work has also indicated that possible extensions of mineralisation run to the northwest and southeast.

ADT estimates that phase two drilling will commence in the coming month, with the mobilisation of a second rig underway. Phase two will focus on the area near the historical Brestic-Jurasevac (referred to as the JB zone) underground workings and exploration drives for an expected campaign of circa 4,000m of drilling.

This phase will hone in on both areas adjacent to historical workings and the large geophysical anomaly which lies to the north east.

Planned drilling at the JB Zone extends over a 350m strike length.

ADT surveyors have assessed material lying around or on the historic dumps at the entrance of the Jurasevac adit. This material is extensively mineralised (below) and contains coarse-grained galena, chalcopyrite and sphalerite. 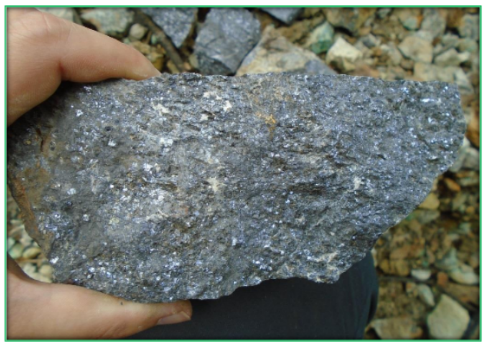 Phase three will entail 3,000m of drilling, with a third rig that will target 400m of strike length in the corridor between Rupice and the northwest and Brestic-Jurasevac to the southeast where geophysics detected a number of chargeable anomalies.

ADT Chief Executive Officer Geraint Harris, commented on the exploration update, “Given the recent success of the geophysics and geochemistry surveys at Rupice, it is appropriate that we accelerate our 15,000m drill program, which is designed to test the most notable anomalies that span the 1km of the Rupice licence between the Rupice North Zone and the JB Zone.

“We were very encouraged when our 2017 drilling successfully identified heavily mineralised and thick intercepts in the Rupice North Zone.

“Similarly, we feel very encouraged by the mineralisation evident from historic workings at the south east end of our license (JB zone) and the geophysical anomalies that rum from there to the Rupice North Zone. In our view that remains consistent with our hypothesis of a potentially large sedimentary exhalative system,” he said.