The Fort Cady project sits on the California-Nevada border in close proximity to Rio Tinto’s Borax operation to the west, and Nirma’s Searles Lake deposit to the north-west. 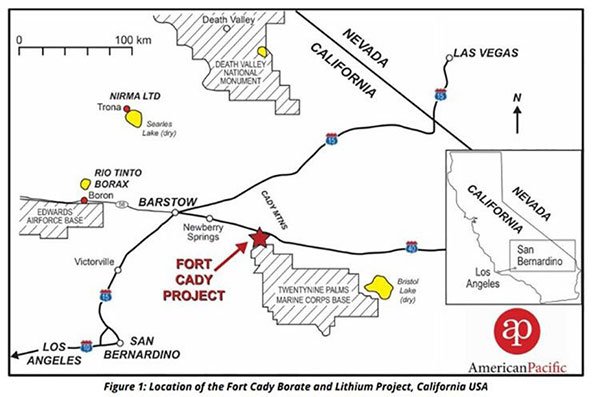 ABR has taken a strategic position in the area, with Nevada considered to be a springboard for several energy storage focused companies including the likes of Tesla.

ABR has only been trading since July, but has been hard at work from the get-go. Its latest results confirm borate mineralisation and continues the trend of identifying higher than anticipated lithium mineralisation within the borate-hosting formation.

It should be noted here that ABR remains a speculative stock and investors should seek professional financial advice if considering this stock for their portfolio.

Indicated in the table below are the assay highlights from the recent drilling programme.

Six resource drill holes are now complete, with assay results from three additional drill holes still pending. Water samples have also been submitted for analysis from a lithium brine drill hole with assay results pending.
Management’s expectations are high following these results. The current 6800 metre drilling programme is designed to confirm the historical mineral estimate defined on the project during the 1980s.

Commenting on today’s announcement, ABR Managing Director and CEO, Michael Schlumpberger said: “We are excited about the drilling program for two reasons: 1. it is confirming the large historic borate resource and 2. we are intersecting higher than anticipated lithium mineralisation. It all bodes well for a very compelling mining operation.”

The presence of lithium is significant for the company and further highlights the potential of the project and opportunity for lithium by-product credits. Importantly, ABR believes the historical drill assays may be underreporting the grade of the mineralisation.

With just four weeks to Christmas, ABR still has a lot of news to flow to come from the project. Assays are pending for its confirmatory resource drilling with six of 14 holes completed, as well as its lithium brine drilling, with one of six holes completed.

Furthermore, ABR commenced drilling on its borehole for pilot-scale leaching test work, while at the same time test work on leaching lithium from the borate mineralisation has commenced on core samples.

Definition of a maiden JORC (2012) Mineral Resource Estimate and Scoping Study on the borate project is targeted for release in Q4 CY17.