New preliminary channel samples have highlighted the potential for significant shallow gold mineralisation at Abi, particularly in the vicinity of hole GDD044.

As indicated on the following map, Kingston has been conducting sampling programs in the Abi area peripheral to GDD044 (highlighted in blue) in order to delineate new surface mineralisation that could indicate a continuation of the same mineralised breccia at depth. 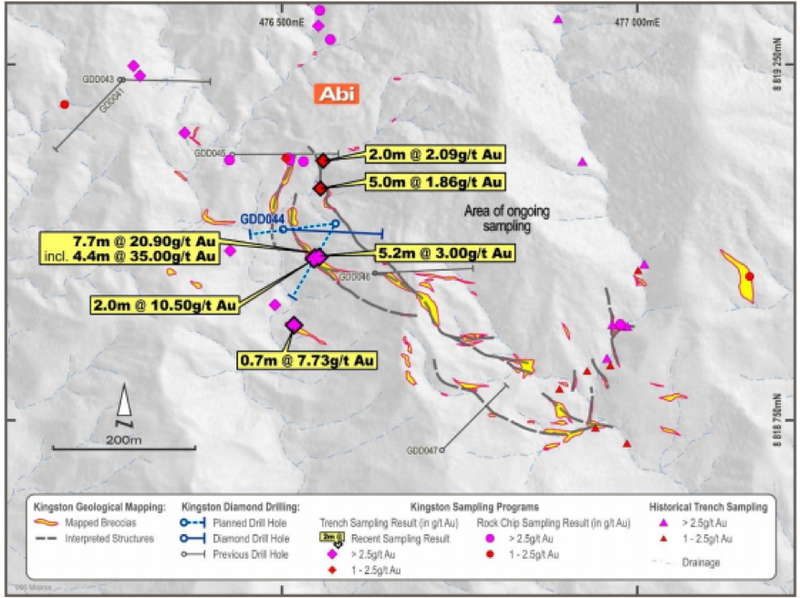 Final and preliminary assay results from this work have returned significant gold values, including 7.7 metres at 21 g/t gold and 2 metres at 10.5 g/t gold.

The new high-grade results from channel samples south-east of GDD044 show that mineralisation is open.

Discussing the broader significance of these results in terms of potentially developing a starter pit at Misima, managing director Andrew Corbett said, “These outstanding geochemical results continue to build the picture for us at Abi, adding further weight to the rock chip and channel samples reported on 17 September and the exceptional result reported in hole GDD044.

‘’While it’s still early days with this target, the results so far certainly give us confidence that there is more to come, and we are looking forward to seeing what the upcoming drilling can deliver.

“We expect to be drilling a number of follow-up holes at Abi over the coming months, in conjunction with our program at nearby Ewatinona.

‘’The broader Quartz Mountain region continues to shape up well as we look to deliver on our strategy of identifying potential starter pit areas at Misima, with the added benefit of being close to the historical plant site and haul roads.”

The breccia unit is interpreted to be steeply dipping to the north-east, potentially controlled by the north-west trending, north-east dipping Abi fault.

Follow-up drilling at Abi has now been designed to specifically target extensions of the mineralisation identified in GDD044.

Following on from the geological review of the Quartz Mountain area, the geological model for the Abi prospect has been updated to incorporate a new interpretation as depicted below. 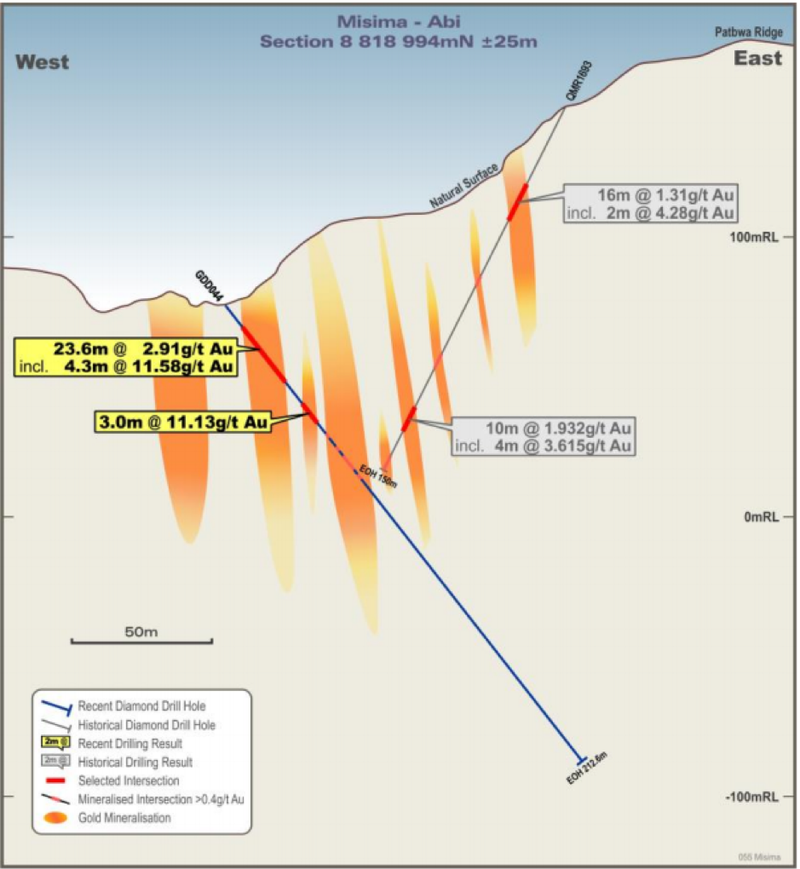 Two diamond drill holes have been designed to test for further mineralisation at Abi with both holes being collared from the same location, east of the GDD044 collar.

The first hole will intersect the mineralisation in GDD044, approaching from the east in a scissor design.

The hole is designed to extend into the footwall in order to test the extent of mineralisation there.

The second hole is designed to test the new high-grade surface results to the south-east, specifically testing the continuation of the mineralised breccia along strike and at depth.

This should provide valuable strategic data which will also feed into the company’s planned resource upgrade in 2020, a development which is likely to be a significant share price catalyst.