European base metals explorer, Zinc of Ireland (ASX:ZMI) has released impressive phase 2 drilling results from the exploration program being conducted at its Kildare MVT zinc project in Ireland. While it is relatively early days in the 3000 metre program, of the first three holes drilled, one hole in particular featured visual estimates up to 25% zinc sulphide over approximately 21 metres downhole thickness of massive sulphide in the base of reef target at the McGregor prospect.

From a broader perspective, the drilling program has been designed to test multiple targets, including extensions of mineralisation at previously drilled prospects and a number of newly identified high-priority exploration targets within close proximity of the known mineralisation at the Shamrock and McGregor prospects.

The current hole, Z_4069_003, was designed to extend the existing mineralisation at the McGregor prospect. Extensive drilling since the prospect was discovered in the early 1970s defined a thick, high-grade sheet of mineralisation along the Base of Reef horizon, as well as in the overlying Allenwood Beds and the underlying Sub Reef.

The current hole is angled at 56 degrees towards the McGregor Prospect from the east, where it is targeting the Base of Reef horizon approximately 45 metres from the nearest drill holes.

Massive sulphide intersection extends Base of Reef mineralisation at McGregor

This hole has intersected broad zones of breccia-hosted massive sulphides. Visual estimates of up to 25% zinc sulphide are recorded over 17.6 metres calculated true thickness from 394 metres true depth as illustrated below. 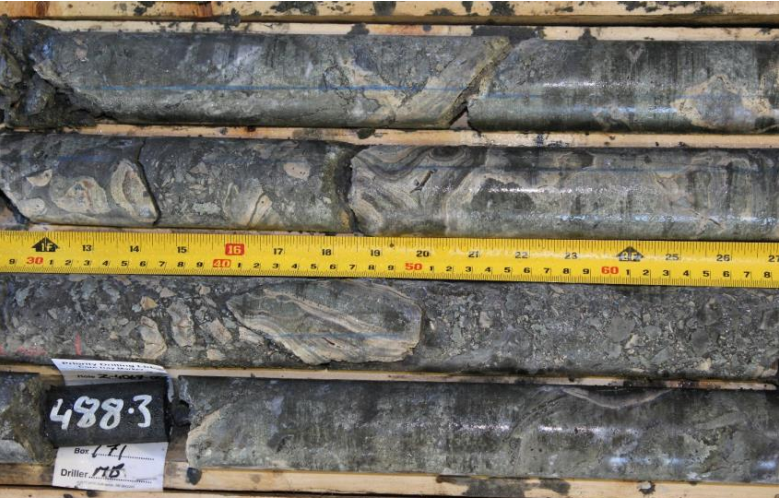 This effectively extends the Base of Reef mineralisation at McGregor, one of management’s key goals in undertaking the current exploration program, and the company expects positive news to continue as further drilling is undertaken and assay results come to hand.

Commenting on this development, ZMI’s Managing Director, Mr Peter van der Borgh, said, “Indications from the current drilling are that there will be further upside down the track and, given the geological breakthroughs we have achieved in recent months, we are increasingly optimistic about the prospects for success at Kildare”.

Kildare is a standout project in a proven terrane, with multiple intersections of high grade base metal mineralisation over considerable depths, and as a van der Borgh noted today, the company has extensive historical data to help develop fact-based exploration targets. Also, as a result of this drilling campaign, the company has a better understanding of the geological characteristics of the McGregor prospect than could be ascertained from historical drilling records.

ZMI has now compiled all of the necessary data to calculate a maiden JORC 2012 compliant Mineral Resource estimate for the McGregor and Shamrock prospects at the Kildare Project. This maiden resource will be based on historical drilling, as well as the company’s own drilling programs in 2016.

Over the past six months, more than 4,500 assays and 2,300 lithological intervals have been taken from historical records and added to a database of nearly 700 drill holes. This information is being merged with generations of geological mapping and geophysical surveys in order to calculate a maiden resource, which will assist in developing an appropriate exploration strategy and realising a significant uplift in the project’s value.

Taking into account promising drilling results and given the fact that this project is essentially a brownfield development with substantial historical data to draw on, ZMI appears to be trading at a considerable discount based on its market capitalisation.

However, this may not be the case for much longer with the next potential share price catalyst being the receipt of assay results which should occur in June. This should be closely followed by the announcement of a mineral resource, potentially providing further share price momentum.