European base metals explorer Zinc of Ireland (ASX:ZMI) informed the market on Wednesday that recent diamond drilling at its Kildare MVT Zinc Project in Ireland had confirmed multiple zones of exceptionally high-grade zinc mineralisation in the shallower regions of the McGregor and newly discovered Celtic Tiger prospects.

This news prompted a 20 per cent share price rerating. However, this was off an arguably oversold base and with the prospect of further positive exploration news and sustained momentum in the zinc price there could be more upside to come.

Management pointed to the highly significant assay results from recently completed diamond drill holes Z_4069_006 (006), Z_4069_007 (007) and Z_4069_008 (008), which it believes clearly demonstrate the potential for shallower mineralisation at Kildare, transforming the outlook for the project and significantly upgrading its discovery and growth potential.

The reported drill holes each intersected multiple zones of mineralisation relating to faulting, brecciation and veining, including zones of massive sulphide development.

The discovery of thick, high grade zinc mineralisation in close proximity to the surface at both the McGregor and Celtic Tiger deposits is highly promising in terms of ZMI expanding the resource and establishing an economically viable mining strategy.

ZMI’s Managing Director, Peter van der Borgh touched on these points in saying, “From an exploration perspective, this means cheaper and quicker drilling for shallower targets, while the presence of shallower, more accessible mineralisation will obviously translate into improved economics when we undertake future financial modelling of the project.”

Of course any data is speculative at this stage and investors should seek professional financial advice for further information if considering this stock for their portfolio.

He also highlighted the fact that these recent exploration results bring into play more than 4 kilometres of similar geology along the western margin of the Graben as illustrated below. 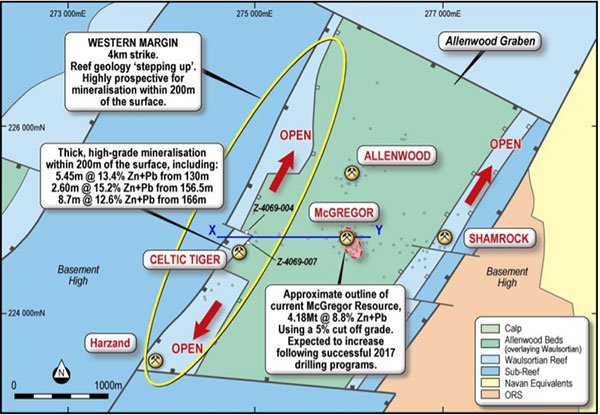 He also noted that the extensions to the Base of Reef mineralisation at McGregor clearly point to the likelihood of an increase in the maiden Inferred Resource.

Extending the Base of Reef mineralisation at McGregor

Of particular significance are the shallower results that appear to be spatially related to the recently discovered McGregor Fault, including 3.1 metres grading 19.6 per cent zinc and lead from 205 metres below surface.

Several other zones were intersected within 250 metres of surface in both drill holes. Three contiguous holes have now intersected this mineralisation which as indicated below may correlate with high grade mineralisation in historical hole HB162, approximately 100 metres to the south. 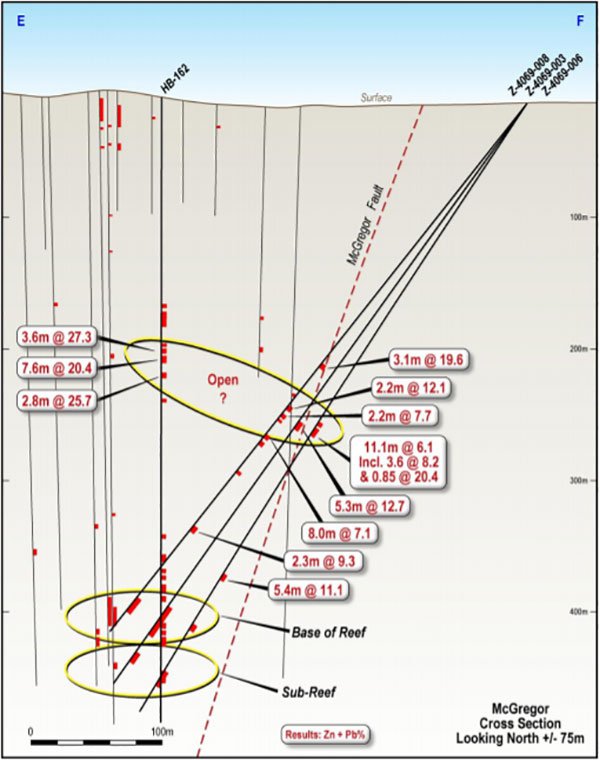 Drill hole Z_4069_007 at the Celtic Tiger prospect was drilled approximately 100 metres south of hole Z_4069_004 reported in July, which intersected several zones of mineralisation including 2.85 metres grading 20.9 per cent zinc and lead from 194 metres.

As indicated above, the latest results are highly encouraging and confirm that the Kildare Project hosts significant zinc-lead mineralisation within 200 metres of the surface. In terms of geological characteristics, the Celtic Tiger mineralisation comprises zones of white matrix breccia (WMB) and calcite veining with abundant tan sphalerite (ZnS), marcasite (FeS2), and occasional galena (PbS) towards the base and at the base of the Waulsortian Reef.

This is significant in terms of ZMI’s prospects for future exploration success as the replacement of breccia clasts is common in many of the more mineralised horizons. Consequently, the mineralisation in Z_4069_007 resembles the mineralisation observed towards and at the Base of Reef horizon at McGregor, which hosts a significant component of the 5.2 million tonne Kildare Inferred Resource.

If the geometry of the mineralisation is also similar in terms of being sub-horizontal, it can be assumed that the intercepts in this vertical hole are close to true thickness, although management noted that this has yet to be confirmed.

Drilling will continue at Celtic Tiger with up to three holes to be completed in the next six weeks. ZMI expects to complete an updated Mineral Resource estimate for the Kildare Project plus a maiden exploration target for the Celtic Tiger prospect by the first quarter of 2018.

As further exploration results come to hand analysts and investors alike will be crunching the numbers on the likely quantum of the mineral resource update which could result in sustained share price momentum leading up to the release of this data.