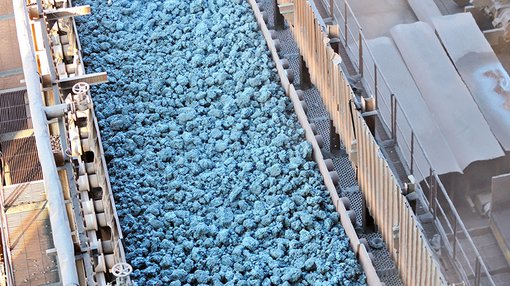 Red Mountain is a globally significant VMS project with two already identified deposits — Dry Creek and West Tundra Flats. It contains polymetallic VMS mineralisation rich in zinc, silver and lead, with potential for significant gold and copper. Mineralisation occurs from surface, and is open along strike and down-dip.

The company sees significant discovery potential in the project given the lack of modern day exploration at Red Mountain. This is further enhanced by the very nature of VMS clustering in camps, and the potentially large areas over which these can occur.

Mapped below is the location of the Dry Creek and West Tundra Flats VMS deposits (purple shape of mineralisation projected to surface) with drill hole traces and priority EM conductors on DGGS geology map. 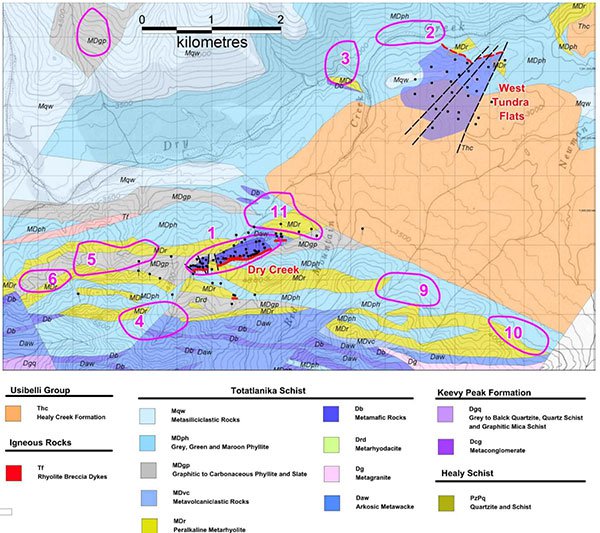 WRM also intends to conduct a 3000 metre follow-up diamond drilling programme on the best of the more than 30 already identified exploration targets.

A diamond core rig will drill throughout the 2018 summer season, from May through to October. Drill holes will test for thickened intervals within the two known deposits (5-10 holes), numerous extension targets defined by geochemical and geophysical vectors (5-10 holes), as well as a number of the new targets as ground surveys early in the field season firm-up target locations for drill testing (15-30 holes).

WRM also has plans for a comprehensive 1800 line kilometre of high-powered airborne electromagnetic (EM) geophysics to identify conductivity anomalies associated with massive sulphide mineralisation to depths of 500 metres. This data will augment the existing shallow EM that has identified 30 conductivity anomalies and importantly assist in prioritising those with depth extent and potential to be associated with a large VMS orebody (>10Mt).

There are also plans for a dedicated field reconnaissance crew to map and sample all 30 near surface conductivity anomalies. Surface sampling would include systematic rock chip traverse sampling to characterise the geochemical alteration halo for each prospect area, as well as a focus on detailed sampling of any massive sulphide horizons identified.

Prospective areas prioritised from the airborne EM and surface geochemical halo mapping would then undergo more detailed mapping, ground geophysics and geochemical sampling (rock chip and soils) prior to drill testing of the top five to ten targets.

“Importantly, the two deposits identified within the Company’s extensive land holding immediately placed the Red Mountain zinc project as one of the highest grade and more significant deposits of any zinc company listed on the ASX and an important VMS asset within a global context. Now it is time to get on the ground. As announced on 13th December, we have secured one potential funding solution to allow us to commence this work. This is an exciting time for White Rock.”

The funding solution that Gill refers to is a $7.2 million Equity Placement Facility with Kentgrove Capital Growth Fund.

An important part of the 2018 exploration programme highlighted by WRM is the plan to assess the potential for precious metal zones proximal to the massive sulphide mineralisation. Gold mineralisation is usually found at the top of VMS base metal deposits or adjacent in the overlying sediments. Gold bearing host rocks are commonly not enriched in base metals and consequently often missed during early exploration sampling. This provides an opportunity for potential further discoveries at Red Mountain.