The Statement of Mineral Resources compiled by RPM Global Holdings (RPM), formerly RungePincockMinarco Limited, is reported in accordance with the requirements of the 2012 JORC Code.

RPM has provided some informal modelling based on potential open pit/underground mining strategies which FinFeed will examine after discussing the headline numbers.

While this does not constitute a scoping study, it provides some insight into options that may be open to WRM, as well as taking into account other variables such as different cut-off grades that could be deemed appropriate depending on management’s decision to opt for an open pit and/or underground mining strategy.

It should be noted here that WRM is an early stage play and investors should seek professional financial advice if considering this stock for their portfolio.

The total inferred mineral resource of 16.7 million tonnes grading 8.9% zinc equivalent for 1.5 million tonnes of contained zinc equivalent at a 1% zinc cut off for Dry Creek, 3% zinc cut off for West Tundra Flats and 0.5% copper cut-off for the Dry Creek copper zone highlights the fact that Red Mountain is a quality base and precious metal asset. It should also be noted that mineralisation commences at surface and is open down dip.

The cut-off grade was calculated to report the Mineral Resource contained and to demonstrate reasonable prospects for eventual economic extraction. A 1% Zn cut-off was used for Dry Creek in consideration that sufficient grades are obtained for the combined elements with a likely open pit mining method. A higher cut-off grade of 3% Zn as indicated below was used for West Tundra Flats in consideration of the likely underground mining scenario.

Commenting on the release of the maiden resource and reflecting on the implications for the broader project, WRM’s Chief Executive Matt Gill said, “Establishing a Mineral Resource estimate for the two deposits at Red Mountain underpins our belief that the Red Mountain project can be home to a new camp of high grade zinc-silver-gold VMS deposits”.

Gill highlighted the fact that the maiden Mineral Resource estimate validates WRM’s view on the potential for the district to yield further high-grade VMS deposits. On this note he said, “Our recent examination of the historical geochemical and geophysical databases using a combination of world experts in the fields of VMS mineralisation and electromagnetics has already identified 30 conductors that are associated with geochemical anomalism”.

WRM has only scratched the surface at Red Mountain

Indicating these recent results could just be the tip of the iceberg, Gill said, “We are highly encouraged by this initial Mineral Resource estimate, especially as it only encompasses a small portion of our total tenement holding, and we look forward to adding considerable additional discoveries in the near future.”

WRM is now preparing a program to advance the understanding of the project, focussing on the already defined geophysical targets that exhibit the same signatures as the two zones that have already been drilled.

The high priority VMS targets are conductors located within zones of anomalous surface geochemistry that are indicative of proximal VMS mineralisation as illustrated below. The proposed field work will include surface geochemical sampling and ground geophysics to define drill targets for follow-up. 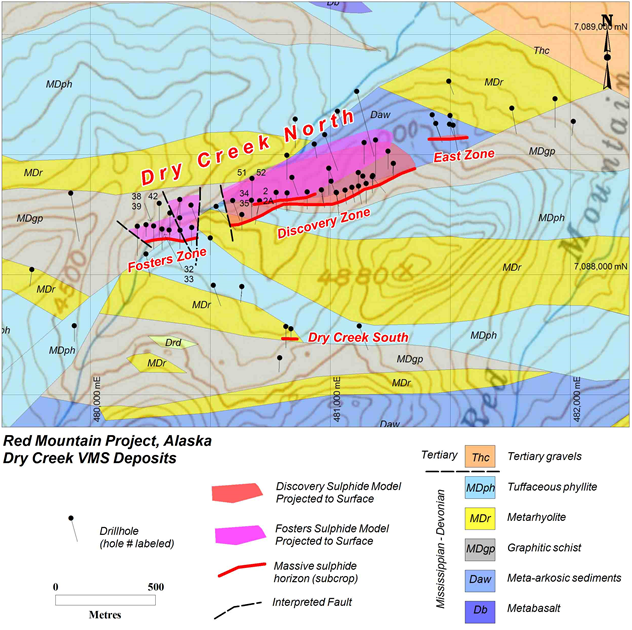