One of the key reasons for the research house focusing on this asset is that its value doesn’t appear to be captured in WRM’s enterprise value.

IIR considered three methods in valuing the company’s Red Mountain zinc – silver – lead – gold VMS project, and have opined a preferred valuation of A$52M (within a range from A$30 to A$66M). This represents an equivalent WRM share price of 6cps – WRM has been trading at 1.5cps over the last few months.

Of course, it should be noted that broker projections and price targets are only estimates and may not be met. Also, historical data in terms of earnings performance and/or share trading patterns should not be used as the basis for an investment as they may or may not be replicated. Those considering this stock should seek independent financial advice.

However, before examining some of the key factors highlighted in the IIR report it is worth noting that WRM also has a relatively advanced gold and silver asset which is expected to generate free cash flow of more than A$100 million over its initial 7-year mine life when up and running.

The Mt Carrington gold-silver project is located in New South Wales on an approved mining lease and with extensive mining infrastructure already in place; this infrastructure alone has been valued at A$20M. The company is working towards completion of a Definitive Feasibility Study in early 2018.

With an established 2004 JORC compliant mineral resource estimate of 338,000 ounces of gold and 23.4 million ounces of silver, even at this early stage the project is valued at circa A$20 million. Consequently, WRM’s enterprise value of approximately A$10 million would appear to be well short of the mark, even before considering its exciting Red Mountain VMS project.

The company has a strong shareholder base with HSBC Custody Nominees (15.5%) and Citicorp Nominees (7.9%) amongst the top 20 shareholders.

Taking into account Red Mountain’s large high-grade resource and the significant prospect for exploration upside, IIR has attributed a preferred valuation of A$52 million on that asset alone, implying 6 cents per WRM share.

This has been released at a time when the company’s shares are trading at 1.5 cents with tax loss selling seemingly taking its toll in May and June. However, this could represent a buying opportunity with the valuation of Red Mountain implying a four-fold premium to the company’s share price, even before any value is ascribed to its Mt Carrington gold and silver asset.

It is worth noting that management acquired the Red Mountain asset for A$1.2 million in scrip, a good deal even based on what would appear to be a lowball valuation being attributed at the moment.

While the full report needs to be examined to appreciate the underlying unrealised value in the Red Mountain asset, the following graphics highlight the superior grades and size of the Red Mountain resource which the two identified deposits offer, while also comparing the comparatively low enterprise value attributed to the company relative to some of its peers which fall short on both measures.

It is noted in the IIR report that the high-grade estimate within the JORC 2012 compliant Mineral Resource Estimate, with some 9.1 million tonnes grading 12.9% ZnEq, puts this project in the top quartile of undeveloped zinc projects in the world. 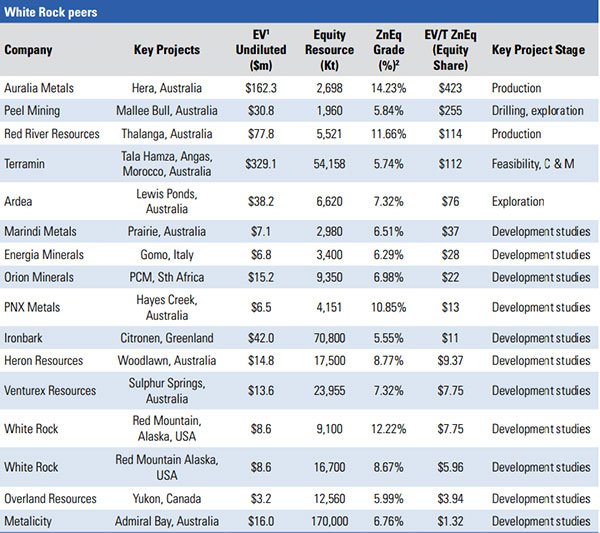 The following table demonstrates the clashing valuations between WRM and many of its peers as it shows in a number of instances where the company’s superior resource size and zinc equivalent grade isn’t captured in the group’s enterprise value. 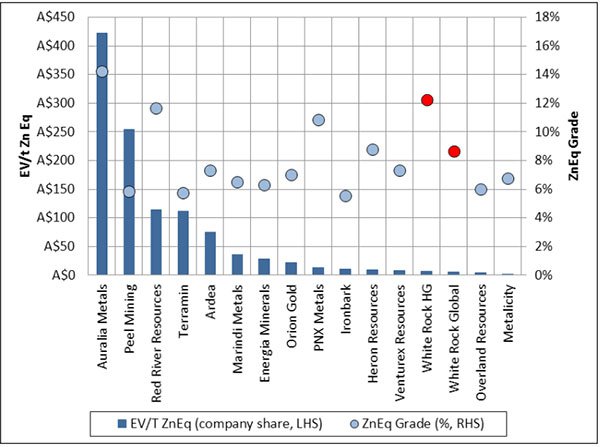 In order to take into account the fact that some of the projects mentioned above are at a more developed stage, IIR has compiled a table that considers only those companies with undeveloped zinc projects, which makes for a more refined like-for-like comparison. 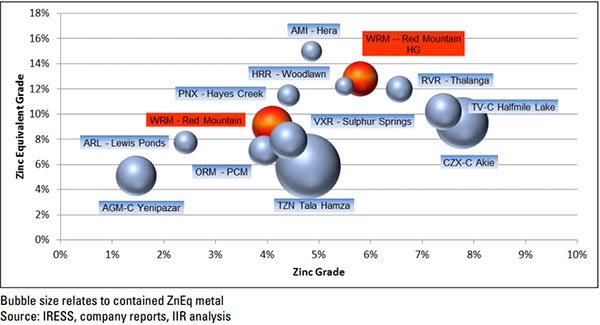 The IIR report also goes into significant detail regarding the positive macro drivers for the zinc price into the near-term future. It was the best performing base metal in calendar year 2016, and as the following chart demonstrates it continues to perform well. 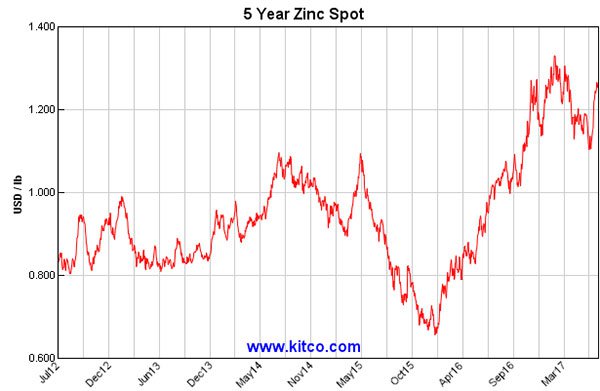 The current zinc price is only approximately 5% shy of last year’s high of circa US$1.30 per pound, a level it hadn’t traded at since the second half of 2007.

Although commodity prices do fluctuate and caution should be applied to any investment decision here and not be based on spot prices alone.

WRM recently highlighted that supply is expected to peak in 2020, which would make for ideal timing for a project such as Red Mountain.