Volt Resources (ASX:VRC) has plugged into the growth of lithium-ion battery production in China, signing three non-binding offtake deals to the tune of 100,000 tonnes of graphite per annum.

It told its investors in a note today that it had managed to bag three separate non-binding memorandum of understandings with three Chinese companies – all of which manufacture lithium-ion batteries.

Combined, the three MOU’s equate to 100,000 tonnes of graphite per annum from the company’s flagship Namangale project in Tanzania.

The three non-binding deals lay the groundwork for detailed test work with an eye towards wrapping up binding offtake arrangements.

The three companies are Optimum Nano, Huzhou Chungya, and Shenzhen Sinuo – with the former of the trio the second largest producer of lithium-ion batteries in China. 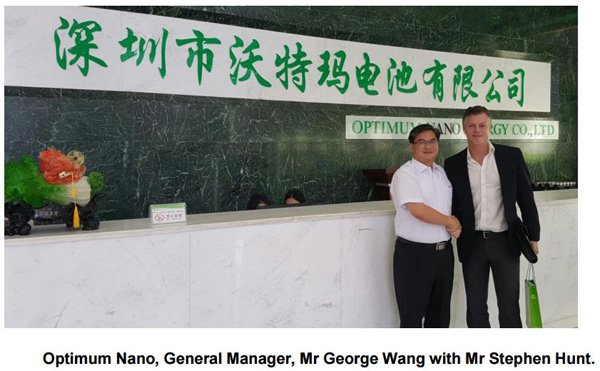 It has supplied 80,000 electric vehicles with lithium ion batteries to date – specialising in providing batteries to electric buses and trucks.

VRC said a recent Benchmark Intelligence report indicated that despite 100% of the natural spherical graphite being produced in the country and production expanding at nearly 50% last year – there are fears that emerging players such as Tesla could make supply scarce.

“What is abundantly apparent is the incredible expansion plans that are taking place in the lithium-ion battery industry within China,” VRC executive chairman Stephen Hunt said.

“Signing the MOUs is a very significant step in the marketing process and positioning ourselves to be at the forefront of graphite supply.”

In other VRC news, it confirmed that it had managed to bag $4 million from a placement of 40 million shares at 10c each before costs – a price which is a 29.6% and 12% premium to the company’s 30 and 15 volume weighted average price respectively.

The placement was made to “a strategic institutional investor” – demonstrating the corporate appetite for graphite companies as the likes of Telsa continue to make waves in the lithium-ion battery market – and subsequently the raw material market.

Last month it managed to bag the services of Edward Sugar-backed EAS Advisors to help tap investors in North America.

Sugar has a track record of investing in early-stage ASX-listed resources plays, having participated in deals worth a cumulative $US3.5 billion ($A4.8 billion) to date.

If nothing else, the non-binding MOUs with Chinese manufacturers will give investors greater certainty around the demand-side for graphite from the project.