An announcement on Thursday morning by Venus Metals Corporation (ASX:VMC) that the company had identified thick high-grade zinc mineralisation at shallow depths at its Pincher Well zinc-copper prospect resulted in the company’s shares surging 25%.

The Pincher Well Volcanogenic Massive Sulphide (VMS) trend is located 600 kilometres north-northeast of Perth and forms part of VMC’s Youanmi gold and base metals project. The tenements hosting the trend are situated 15 kilometres south-west of the Youanmi gold mine and processing plant.

As there are historical and ongoing mining operations in the region, including those at Windimurra and Sandstone, the region is well serviced in terms of infrastructure.

As illustrated below, the trend covers more than 5 kilometres of strike and hosts a number of known zinc and copper prospects including the Linda and Franca Gossans PW17 zinc discovery and a substantial body of zinc mineralisation at North Dome. 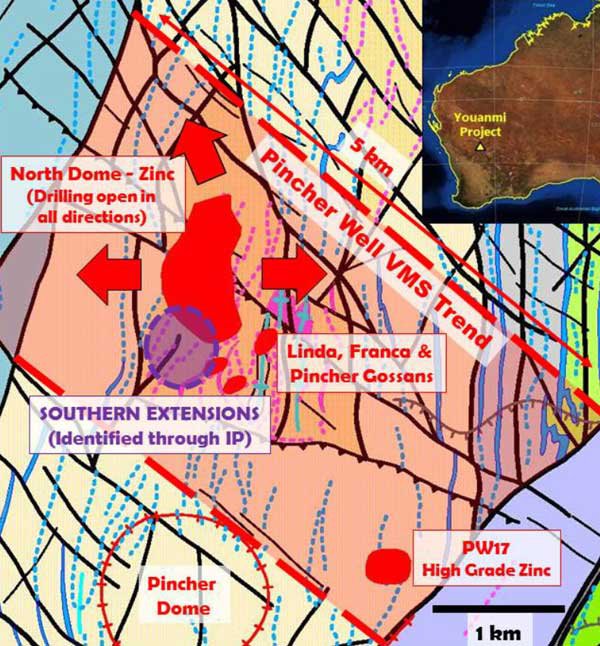 Importantly, mineralisation remains open along strike and at depth and appears to be projecting to surface to the south towards the ‘Linda Gossan’.

Management prepares to ramp up exploration

In view of the highly promising nature of these results, VMC is undertaking an accelerated exploration program which will include additional geophysical surveys and drilling in order to continue to delineate the high grade zones of zinc mineralisation along the highly prospective southern extensions of the prospect.