An Australian junior gold explorer has today published an update regarding its trifecta of gold projects in the Democratic Republic of Congo (DRC). Vector Resources (ASX:VEC) recently signed several gold joint venture transactions in order to secure significant land position and resource holding in one of the world’s largest greenstone belts. 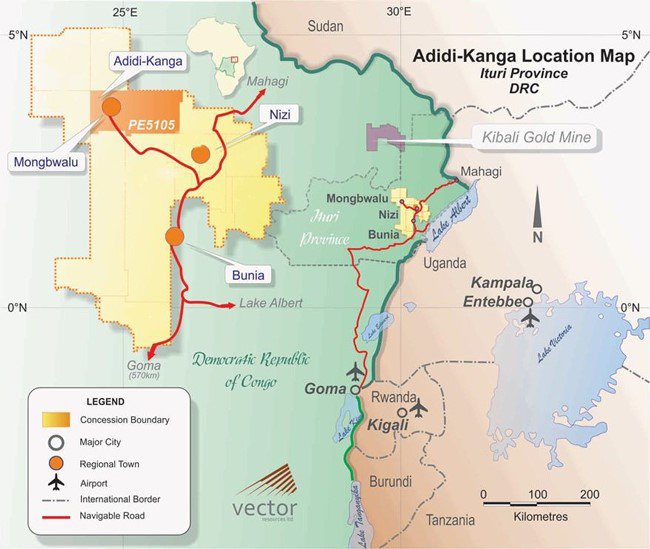 In addition, VEC has signed Heads of Agreement deals with Mongbwalu Gold Mines and Fimosa Capital for VEC to obtain a 60 per cent interest in the world-class Adidi-Kanga Gold Mine, part of the Mongbwalu Gold Project, located in the Ituri Province of the DRC.

It should be noted here that VEC remains a speculative stock operating in a high-risk area and investors should therefore seek professional financial advice if considering this stock for their portfolio.

A review of the status of the Adidi-Kanga Gold Mine has confirmed that the mine is already permitted for development, with Environmental and Social Impact Assessments completed and financial guarantees in place with the appropriate regulatory and administrative bodies in the DRC.

Adidi-Kanga is considered a world-class project comprising 13 licenses extending over 5,033 square kilometres that were the subject of extensive exploration activities by AngloGold Ashanti in the past. AngloGold completed significant exploration and development activities between 2005 and 2013, with the recorded data likely to be of technical use for VEC.

A Feasibility Study for the development of the Adidi-Kanga Mine was finalised by AngloGold Ashanti, who then commenced initial mine construction activities. AngloGold also secured the purchase and delivery of approximately 70 per cent of the mechanical equipment proposed to be installed under the Feasibility Study, at a cost of over US$70 million.

A review of the historical exploration and resource drilling is currently ongoing and VEC is assessing the amount of work VEC will need to complete upon finalisation of the proposed joint venture, following on from AngloGold’s previous DFS.

From the activities undertaken so far, a number of positive findings have already been identified at Adidi-Kanga. VEC says it may be able to incorporate additional areas of mineralisation defined by previous wider spaced drilling by AngloGold Ashanti into a new JORC-compliant Resource that VEC wants to complete in the first half of 2018.

Following the completion of a technical due diligence assessment in late 2017, VEC’s technical team is now on site at Kibali to obtain more detailed information.

According to a shareholder update VEC stated that, “further meetings with senior management from SOKIMO are scheduled later this month in South Africa and the DRC, with negotiations on the key joint venture terms and timings to be finalised”.

Finalisation of due diligence reviews and joint venture negotiations for the Kibali South Gold Project remain on schedule and are anticipated to be completed by the end of February 2018.

The license area at VEC’s Nizi project comprises the historic King Leopold Mine, that was mined during Belgium colonial times and operated throughout the 20th century.

In addition to the King Leopold Gold Mine several other gold prospects have been identified and these are currently the subject of the ongoing technical due diligence work on the Nizi Gold Project.

A key area of focus of the technical due diligence review is the Baluma Gold Oxide Project, which has already been explored by SOKIMO through two auger and RAB drilling programs.

VEC’s technical management team and its consultants have completed extensive due diligence work over the last four weeks and are currently working in the DRC to finalise this step. VEC’s directors have progressed legal due diligence as well as the proposed joint venture documentation.

Both of VEC’s new transactions remain on schedule for completion in January and February 2018. If VEC’s subsequent development work proves to be successful, the company has the potential to transform itself from a junior explorer into a major gold company over the coming few years.