Unite Us deal flow not yet factored into Auctus share price

It looks to be an opportune time to snap up Auctus Alternative Investments Ltd (ASX:AVC). The company is trading in the vicinity of 25 cents per share after receiving strong institutional support in June when the group raised capital at 35 cents per share.

While one of its investments in Boppl was placed into administration on May 9, 2019, the impact of this development was fully explained and understood when Auctus conducted the capital raising some seven weeks later.

From an operational perspective, Auctus Asset Management had a strong quarter, generating over $500,000 in cash receipts.

In addition to the existing Funds, Auctus AM closed out the US$4.8 million investment into Unite Us, a US based technology platform that enables real-time coordination between healthcare and community services, comprehensively tracking the Social Determinants of Health.

The Unite Us Fund invested alongside Oak HC/FT, a US based premier growth-equity fund specialising in healthcare and financial services technology.

Unite Us has performed strongly post investment, securing a multi-year contract with Kaiser Permanente (KP) to scale the model and make it available to the 68 million individuals living in communities served by KP.

These are important developments for Unite Us, and it could be argued that this news which has only just come to market has the potential to generate positive share price momentum.

Auctus AM’s Assets Under Management and Advice (AUMA) now stands at $25 million, not including the Energy Storage Fund which we will discuss later. 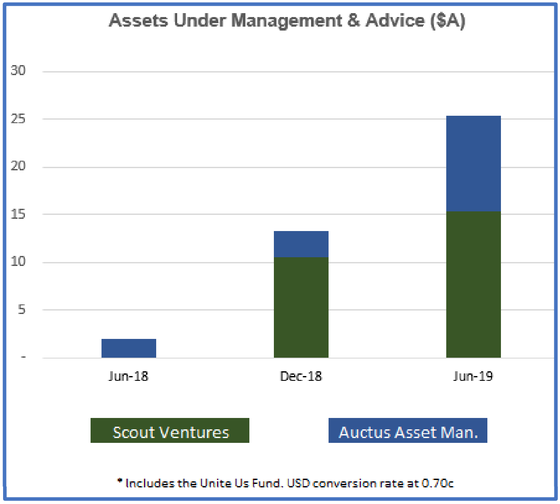 Management continues to conduct in-depth due diligence on a pipeline of unique opportunities which it expects to offer throughout fiscal 2020.

On the deal front, in mid-June Auctus Asset Management announced that it was establishing RBP Partners LLC (RBP) in partnership with an experienced New York based investment team.

In keeping with this announcement Auctus AM launched the US$25 million Energy Storage Fund on June 17.

The Fund has received strong interest since launch and is expected to close during the September quarter.

In May, Auctus Investment Holdings restructured its shareholding in Gophr.

The investment now consists of a 29% equity holding, an £800,000 Convertible Note and a loan to the founders / management of approximately £1.15 million.

For the 6 months to June 2019, Gophr produced unaudited sales of approximately £1.67 million, a robust performance given the December half is generally the stronger one.

Auctus Asset Management finished the June quarter with $530,000 in cash, but this did not include part of the proceeds of the capital raising which have since been received.

Consequently, the company is in a position to execute on management’s strategy of pursuing other investment opportunities in fiscal 2020.