Management was attracted to the Station Creek Project by the presence of major fault structures, historic high grade historic copper rock chip samples and an overall lack of modern exploration in the area, suggesting it is a highly prospective strategic asset with unquantified exploration upside.

The Station Creek Project as shown below consists of a single Exploration Licence (E08/2946) which covers an area of 54km2. 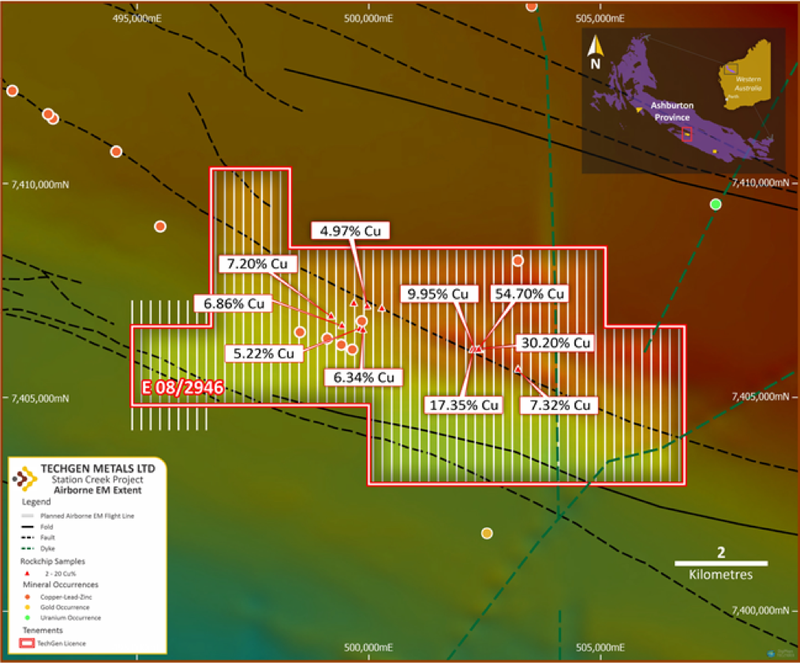 The VTEMTM Max survey at the Station Creek Project will cover the entire project area, consisting of approximately 300 line kilometres of surveying with nominal 200 metre spacing between flight lines.

Historic work and exploration completed by TechGen has identified areas of high grade copper (± silver and gold) rock chip samples and as shown below, outcropping copper mineralisation (malachite and azurite) within the project area.

The VTEM-Max survey is being undertaken to identify possible sulphide mineralisation at depth across the project area.

XRD analysis has been undertaken on a single rock chip sample which assayed outstanding grades of 54.7% copper and 257g/t silver.

The results of the XRD analysis have indicated that in addition to the presence of copper oxide minerals (Malachite, Brochantite and Atacamite) the copper arsenate mineral Olivenite and copper sulphide mineral Djurleite are also present within the sample.

The VTEM survey is anticipated to take 4 to 5 days, indicating some potentially near-term market moving news flow is imminent.