Tando Resources Ltd (ASX:TNO) has advised that the final pre-condition to the company’s acquisition of a 73.95% stake in the SPD Vanadium Project, being South African Reserve Bank approval, has been satisfied and the transaction is now unconditional.

Tando expects the completion of the acquisition will occur imminently.

This comes on the back of recent exploration success at the project which is located in the north-eastern region of South Africa.

Approximately 85% of the world’s vanadium is produced in China, Russia and South Africa.

Given the SPD Vanadium Project is located in one of these producing regions, Tando believes that it has the potential to be globally significant based on its tonnage and grade in concentrate as indicated below. 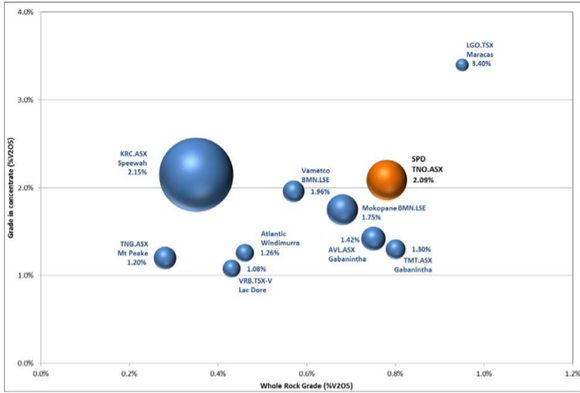 Of course, Tando is in the early stages of its development, so investors should seek professional financial advice if considering this stock for their portfolio.

Only a fortnight ago, Tando identified a major new cluster of vanadium pipes at SPD.

Also, Tando announced in early August that a magnetic survey had identified a new 400 metre by 400 metre target in the north-east of the project, triggering a 15% share price rally.

Since then, Tando has mapped and sampled the target area, confirming the presence of a new cluster of vanadium pipes.

Analytical results from these samples are pending, but on-ground inspection indicated that the pipes were very similar to those already mapped and sampled.

As a result, Tando has included this cluster on the list of targets which will be drilled as part of its upcoming program.

Further, Tando believes that confirmation of the presence of this new cluster provides more strong evidence of the potential for a low cost direct shipping ore (DSO) operation at SPD.