Following exploration success, a mineral resource upgrade and a successful capital raising in the first six months of 2020, Superior Resources Limited (ASX:SPQ) is emerging as one of Australia’s most promising diversified mining groups.

On one hand, SPQ offers excellent exposure to the rampaging gold price, while on the other the company’s potential to tap into the strong recovery in copper and nickel bodes well for the group.

SPQ’s sub-$10 million market capitalisation sees it punching above its weight, as there are few companies of this size with established in-ground resources valued far in excess of their enterprise value.

As a snapshot, the company has either defined resources or is exploring for large lead-zinc-silver, copper, gold and nickel-copper-cobalt deposits in northern Queensland.

At Greenvale, the company holds ground covering the majority of the Ordovician sequences in the region, which could be best described as the unexplored northern remnant of Macquarie Arc, a prolific geological trend that hosts the giant long-life low-cost Cadia and Northparkes copper-gold mines in New South Wales.

The following map shows the location and extent of the Macquarie Arc system as it winds its way down from the northern-most areas of Queensland where SPQ’s Greenvale projects are situated through to some of New South Wales’ largest gold deposits. 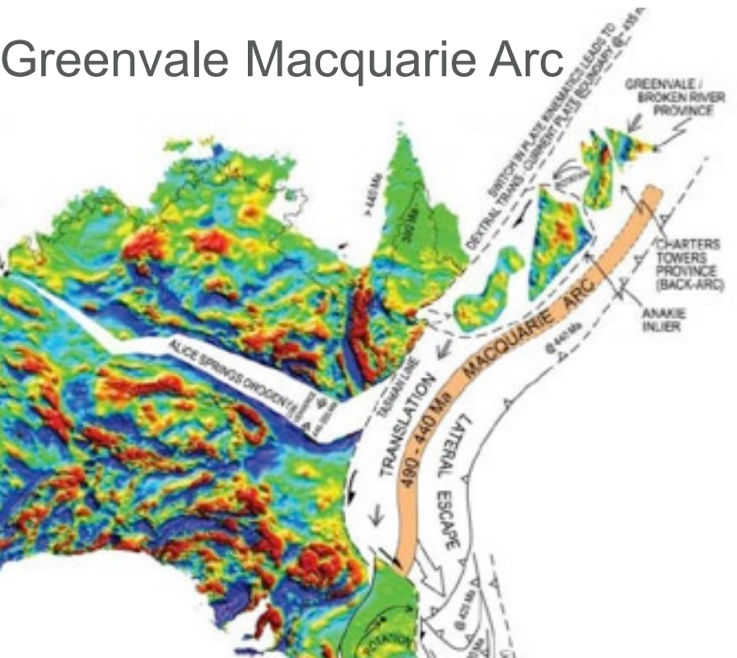 Just today, the company announced the commencement of Phase 1 of a resource drilling program at its Steam Engine Gold Deposit, part of the Company’s 100%-owned Greenvale Project.

Fifty RC and Diamond Core holes are planned for a total of 2,500 metres to enable the completion of a Scoping Study.

“We are very pleased to be kicking off the next stage of Steam Engine just as the gold price begins to test its record highs. Earlier this year we started evaluating the deposit on the basis of an Aussie $2,000 gold price and fundamentals appeared attractive at the time. On the back of the current outlook for gold, we are doubling our efforts to expedite completion of a Scoping Study and investigate our toll treatment options,” Managing Director Peter Hwang said.

“Steam Engine is a particularly exciting gold deposit. The current mineral resource is based on only 30% of at least 2.5 kilometres of historically identified lode strike length and only to shallow depths. We have also identified a substantial amount of additional lode potential from existing data and field observations. Additionally, we recognise that a more significant high-grade ore shoot system may exist as a feeder system beneath the known lodes. This represents significant upside potential for Steam Engine, which we will be testing during the current program.

“The drilling is expected to continue for at least two months and backing up the program will be regular deliveries of samples to the assay laboratory. We will be updating the market regularly as the drilling progresses.”

The immediate focus is on the aforementioned Greenvale Project which is highly prospective for VMS (volcanogenic massive sulphides) and porphyry copper, gold, zinc and silver deposits.

As indicated below, the project is located within an area of notable economic significance, being proximal to the Kidston, Balcooma, Surveyor and Dry River South deposits. 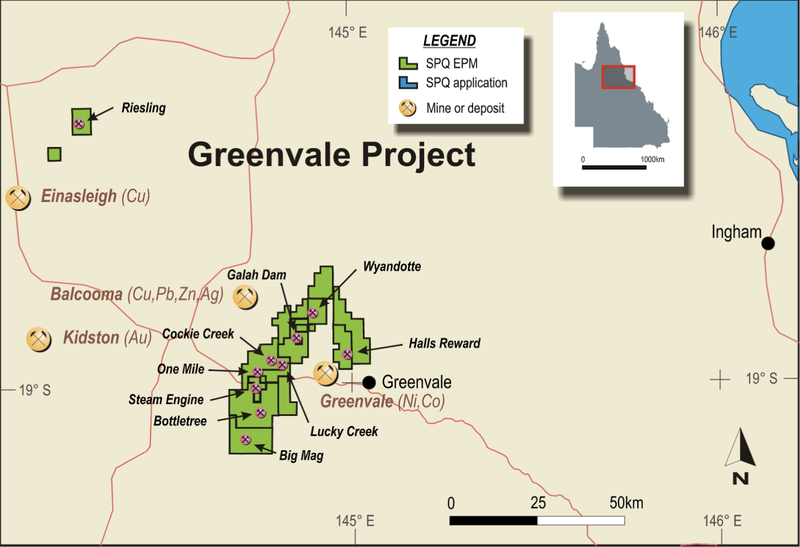 While this area contains a number of drill-ready prospects (with drilling having commenced today), the key focus at this stage is the Steam Engine Gold Deposit where SPQ delivered an 11% resource upgrade in May, triggering a significant uptick in the company’s share price.

It was only a month later that management updated the market with a new work program to test the gold mineralisation potential underlying this resource.

On this note, managing director Peter Hwang said, “The current resource at the Steam Engine Gold Deposit is shaping up as a solid, quality deposit and the potential to add substantial ounces is obvious.

‘’The upgraded Mineral Resource Estimate is based on only 30% of at least 2.5 kilometres of strike of outcropping lode and only modelled to relatively shallow depths.

‘’Surface soil geochemistry supports the potential for a considerably larger shallow lode system that is yet to be tested.”

“However, what we are particularly excited about is the possibility of an extensive high-grade feeder system developed underneath the known lodes.

‘’It is not uncommon for these feeder systems to develop thicker and more extensive zones of high-grade gold mineralisation.

‘’This is particularly so at Steam Engine where the mineralisation is mainly hosted within shear zones, and shear zones are conducive to the development of thicker vein sets.”

“Mesothermal vein-type gold deposits account for a large portion of the world’s economic gold deposits and they can hold impressive amounts of high-grade ore.”

Is the current resource the tip of the iceberg

As outlined below, Steam Engine currently has an Indicated and Inferred Mineral Resource Estimate of nearly 1.3 million tonnes at 2.3 g/t for 94,000 ounces of gold. 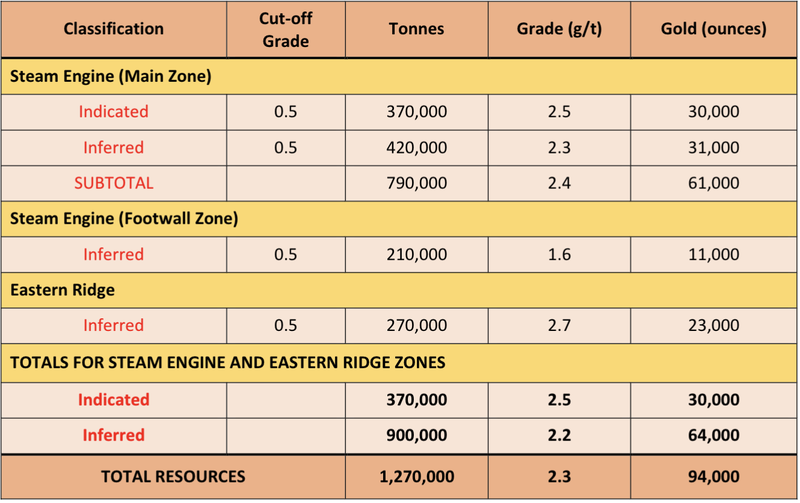 However, as Hwang highlighted, the upgraded resource estimate only takes into account 30% of the identified strike which is at least 2.5 kilometres based on early stage shallow depth modelling.

Two other gold load zones aside from the Steam Engine Lode have been identified, being the Eastern Ridge Lode and the Southern Zone of lodes as shown below. 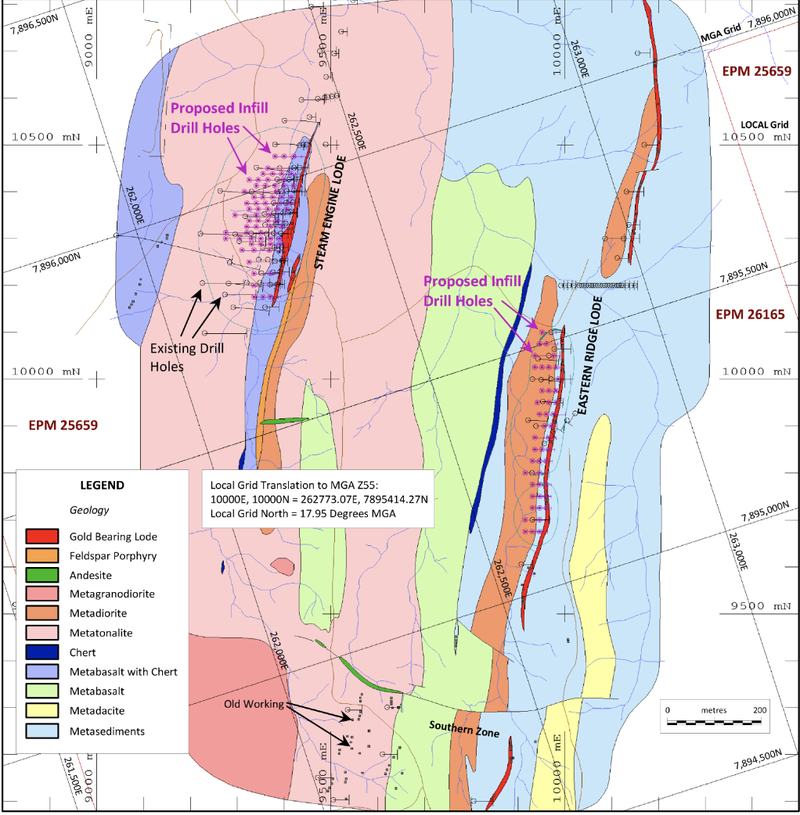 The deposit has the potential to contain substantially greater tonnages of high-grade gold ore shoots that may extend to significant depths.

The mineralisation is hosted within structures that are sheared to a greater extent than many similar lode gold deposits, increasing the potential for significant thicknesses of gold lode mineralisation.

Many shorter structures exist on the hanging wall side of the Eastern Ridge lode zone, such as the Steam Engine lode and numerous other zones have mainly only been identified from historic gold soil sampling.

Large portions of the world’s economic deposits of gold are found in vein systems of this kind and they can hold impressive amounts of valuable ore.

The veins and shoot zones typically can extend to significant depths with gold grades typically higher than other types of gold deposits.

Based on the findings to date, management will be accelerating the project to a Scoping Study with a view to determining whether a feasibility level of study is warranted.

The commencement of the first-stage infill drilling program at Steam Engine is designed to upgrade most of the gold lode zones within optimised pit models to Measured and Indicated resources (see previous graphic for the locations of the proposed drill holes).

To minimise costs, RC drilling is proposed for most of the holes.

Several diamond core holes will be drilled to enable metallurgical, structural and other geological studies to be undertaken.

This would be subsequent to a positive outcome from the Scoping Study.

Hwang sees this strategy as the best pathway to near-term cash flow generation, and with the precious metal at all-time highs accelerating the project appears to be the best option.

SPQ also has a prominent exploration position within the Carpentaria Zinc Province, one of the world’s richest mineral producing regions, and the company is focused on multiple Tier-1 equivalent exploration targets at various sites.

This region includes the company’s Nicholson Project where recent drilling has resulted in an upgrade of its prospectivity for base metals.

Drilling confirmed the presence of SEDEX-style mineralisation system at Nicholson West, contained within a thick (up to 340 metres) Mount Les Siltstone rock unit.

The Nicholson Project is located within the globally attractive Carpentaria Zinc Province, which contains an estimated 20% of the world’s zinc inventory.

Management was encouraged by the overall results of the 2019 drilling program, particularly considering that only three of the initial eight targets have been drilled. 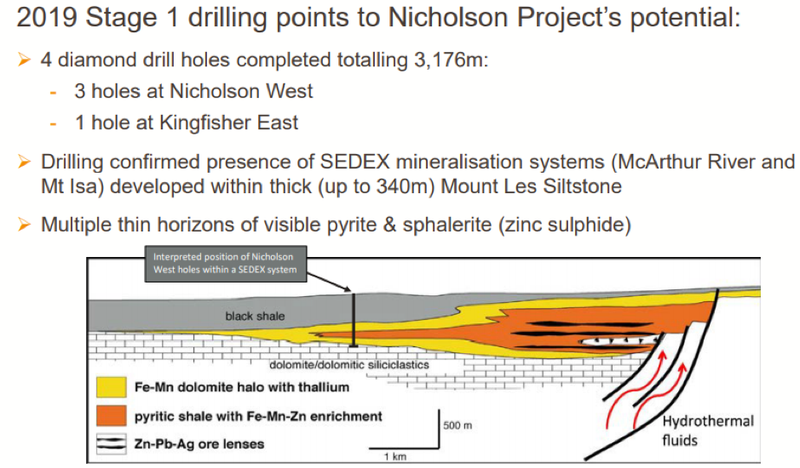 Providing further encouragement has been the release of data from the Walford South target, one of the 2019 program targets that is yet to be drilled and which is located only six kilometres away from Aeon Metals’ Walford Creek deposit.

With extensive project infrastructure having been established, SPQ will be following up on expressions of interest from third parties regarding potential joint venture arrangements.

Management sees the potential for world-class discoveries similar to the company-making deposits that were a source of riches at McArthur River, Century and Mount Isa.

As the map below shows, these projects lie in relatively close proximity to the Nicholson project with Century equidistant between Nicholson and the group’s Victor Project to the south. 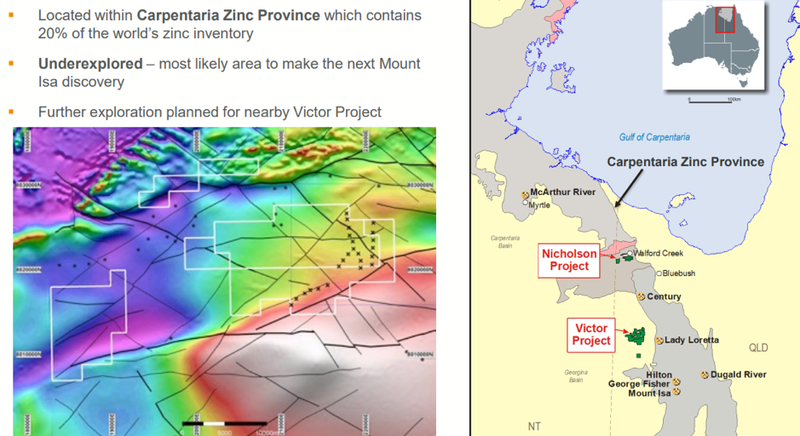