Stonewall Resources Limited (ASX:SWJ) has announced the promising results from the Theta Hill Scoping Study. The study was released today as part of the small cap’s vision of developing a pipeline of open-cut targets.

The Theta Hill scoping study shows clearly the historical mines of this goldfield have open-cut oxide gold potential. As announced by the company in September, Theta Hill contains an open-cut JORC resource of 4.48Mt at 4.14g/t gold for 600koz (Indicated & Inferred).

The company is now turning its attention to converting part of its large 5.8Moz Mineral Resource into a mining reserve. Additional drilling is underway at Theta Hill to improve the JORC confidence category to primarily Indicated ahead of reserve declaration scheduled for 1Q 2019. 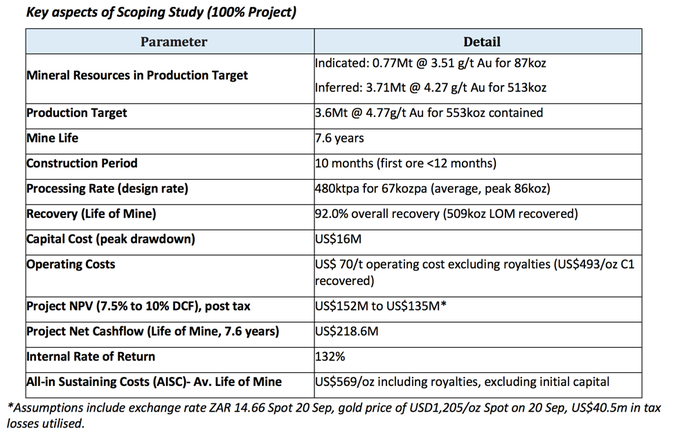 Much of the infrastructure to restart gold production is already in place including the fully permitted tailings dam, roads, power and water. The preliminary estimate for the TGME CIL plant refurbishment is approximately US$11.1 million — this includes crushing and grinding expansion to 500Ktpa.

Other local drilling targets have been identified, which means the potential to enhance project economics through additional ounces. The next targets for drilling, outside of the immediate Theta Hill area, include Vaalhoek Open-Cut (0.62Mt at 16.9 g/t gold for 335Koz (82% Inferred, 18% Indicated) and Columbia Hill.

MD Rob Thomson commented on the news: “Our team in South Africa and Australia has been diligently working on this open-cut vision, as the first stage of a planned series of open-cut and underground developments to transform the company into a low-cost gold producer.

“We look forward to continuing to deliver on our stated commitment of delineating high grade open-cut gold deposits which can be brought into production at low cost.”

The Scoping Study was delivered by South African consultants Minxcon, and undertaken in accordance with the JORC (2012) Reporting Code.

It highlights that the previous focus on underground mining potential by past operators and miners can be examined in new light with a view to developing low cost open-cut mines, which has been the recent focus of SWJ.

The site is situated within 2km by road of the existing, fully permitted CIL plant with a US$11.1 million capital upgrade planned. The company considers the project is potentially economically viable based on its ability to rapidly pay back project start-up capital (7.4 months from first cashflow) and potential ongoing positive operational cash flows for up to 7.6 years as demonstrated by the preliminary mining schedule.

The current mining inventory assumes 58% of ounces mined from Indicated Mineral Resources (37% of tonnes) during the first nine months of production where in excess of 35,000 ounces of gold is produced. Further, detailed monthly scheduling has been run for the life of mine.

A ratio of 83% Inferred and 17% Indicated resources were adopted in the Scoping Study model referenced in this report.

Mining and production schedule for Theta Hill Gold Mine

In the words of the company, “despite the higher strip ratio (due to the narrow gold seams) large volumes of material can be removed efficiently”. Waste is placed back in the pit once the ore is removed, and it is also planned that the rehabilitation will be progressive.

Further, the company anticipates only minimal drill and blast required at the site due to the highly broken and fractured ground. This method is anticipated to be low cost, at around US$0.90/t of ore and US$1.27/t of waste moved. 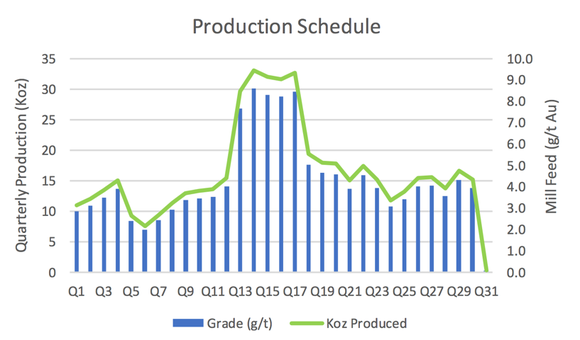 SWJ confirmed its commitment to progressing the project towards Decision to Mine (DTM) in 2019, and consequently has a full feasibility study planned. Following that, it is anticipated financing can be secured and DTM made.

The company listed the following works to be completed in coming months and into CY2019 as part of the feasibility work: