Shares in ZMI surge 50% on back of high grade assays 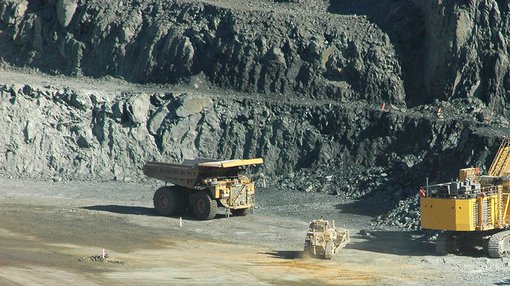 Shares in Zinc of Ireland (ASX:ZMI) spiked 50% on Friday morning under the largest trading volumes it has recorded since October 2016.

Importantly, these results are approximately 45 metres from the nearest drill hole, significantly extending the Base of Reef mineralisation at McGregor.

This development is particularly important in terms of upgrading the resource which currently stands at 5.2 million tonnes grading 8.6% combined zinc and lead.

The drilling results carry even more significance in the context of geological trends that are characteristic of Irish zinc deposits where ‘feeder’ structures are often sites of increasing thickness and grade.

On this note, the third hole discovered a mineralised fault located to the east of the Base of Reef target. This structure displays the characteristics of a ‘feeder’ fault with the McGregor mineralisation sitting in its hanging wall.

It should be noted that historical performance or share trading patterns should not be used as the basis for an investment as they may or may not be replicated. Those considering stocks in these markets should seek independent financial advice.

This is particularly encouraging because mineralisation in Irish zinc deposits is commonly associated with such ‘feeder’ faults, and such mineralisation often thickens and increases in grade in the direction of the faults.

A good example of this is the world class Lisheen deposit which is located in reasonably close proximity to the Kildare project as evidenced in the following map (Lisheen located along trend to the south of Kildare). 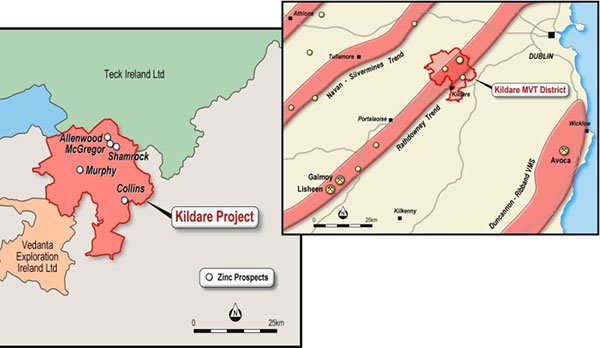 Two further holes have been completed approximately 1 kilometre to the west of McGregor, one of which discovered another significant mineralised structure along the Western margin of the Allenwood Graben.

This is also an important development as it confirms ZMI’s geological model, opening up the western side of the Kildare project area by highlighting the potential for mineralisation to be developed at the Base of Reef adjacent to this major fault (see ‘Western target area below’). 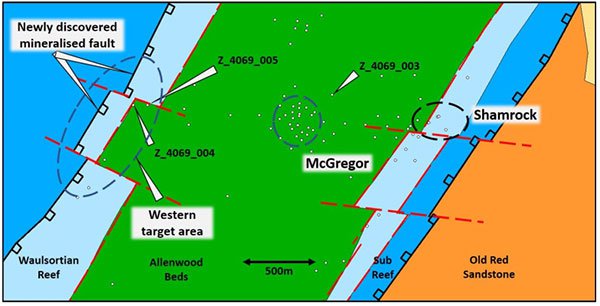 Hole five targeted the Base of Reef adjacent to this fault, approximately 90 metres to the east of hole four and encountered a second fault that appears to have displaced the target. ZMI is planning additional holes as part of the phase 2 diamond drilling program with the objective of increasing the mineral resource based on the latest McGregor intersections. Drilling has been temporarily suspended to allow the project team to interpret the geology and mineralisation in hole 3 to assist with planning additional follow-up holes.

ZMI Managing Director, Peter van der Borgh, summed up recent developments in saying, “It’s always exciting to be able to deliver spectacular drilling results such as this, but the latest round of drilling has also delivered a host of other invaluable geological and technical information which, together with our recently published maiden JORC resource, has laid the foundation for an exciting period of exploration”.

He also highlighted the fact that the geological interpretations stemming from recent information, while supporting the company’s overall strategy, also provides the information required to conduct a more focused exploration campaign given the better understanding of the geology at McGregor.