Prospect Resources is a very high risk stock. Getting mining projects up and running in countries such as Zimbabwe is no simple feat for political and social reasons, and there may be challenges ahead. You need to fully inform yourself of all factors and information relating to this company before engaging with it.

Prospect Resources (ASX:PSC) has had its second hit of spodumene-bearing pegmatite within days – with the latest hole finding a combined 9m as part of its lithium hunt at its Arcadia project in Zimbabwe.

Prospect told its shareholders this morning that a second drillhole as part of a 30-hole campaign had intersected visible spodumene bearing pegmatites.

It was a combined 9m from five zones, including 7.75m from the main zone.

The latest hole was drilled as a step-out hole from its ACD001 hole, and PSC said that the latest results was in line with historical data from the project.

Earlier this week PSC said that the first hole in the program hit a combined 12.35m of spodumene-bearing pegmatite, including an 8.24m section from the main zone.

PSC announced that it had picked up the option on the Arcadia Project in May, which has an initial exploration target of 15-18 million tonnes of pegmatite at 3-5% lithium oxide.

While there has been historical drilling on the permit, this was done before the JORC 2012 standard was in play and therefore PSC will need to do its own drilling to come up with a JORC Resource on the project.

PSC has previously told shareholders at the time that intermittent production between 1954 and 1972 had produced over 15,000 tonnes of mixed lithium ore.

Meanwhile, it told shareholders today that a second diamond drilling rig is on the way to the project – meaning drilling should occur at a quicker rate now. 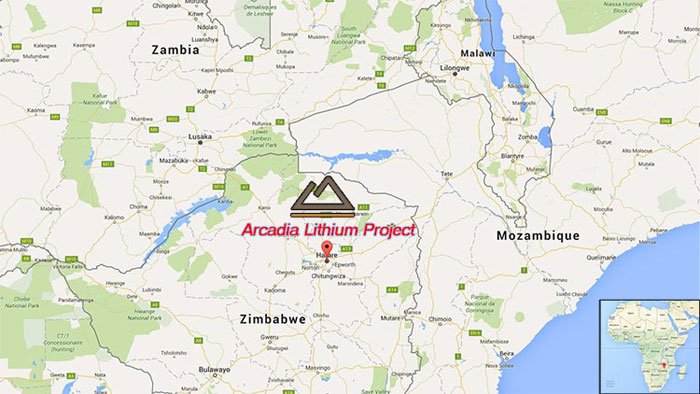 Location of the Arcadia lithium project in Zimbabwe