Rumble Resources Ltd (ASX:RTR) today announced it has signed a binding option agreement to acquire the Nemesis high-grade gold project, which comprises 141.6 hectares of tenements 40 kilometres north of Cue in the Murchison Goldfields of Western Australia.

The company recently added the Earaheedy high-grade zinc project and the Munarra Gully high-grade copper gold project, and is now adding the Nemesis project to its portfolio.

All of the projects will be drilled tested this calendar year, along with the RTR’s Fraser Range projects (being drilled by the company’s JV partner IGO). With so much exploration happening at once, RTR’s shareholders could see multiple near-term share price catalysts should any of the programs make high-grade discoveries.

The Nemesis Shear Zone that hosts the Nemesis gold mine is prospective for mineralised strike and depth extensions with potential to host high-grade shoots similar to the Nemesis ore body. Previous drilling campaigns focused on defining shallow oxide mineralization, and as a result no drilling has tested the depth extension of the Nemesis deposit below 40 metres.

The Nemesis Shear Zone also contains near-surface laterite/saprolite mineralization, and the northern portion of the tenement contains a series of high-order gold in soil anomalies. 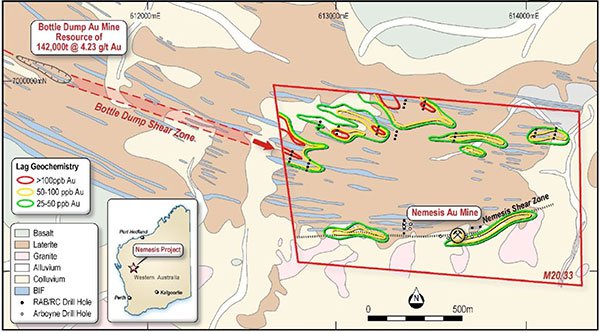 Most of the project covers land over a prominent lateritic plateau, which rises some 35 metres above the general topography. An east-west trending mineralised shear zone forms the boundary between the north sequence of mafic volcanics/BIFs and granites to the south.

During the option period RTR plans to undertake several drilling programs, circa April 2018, which will target high-grade gold lodes at the Nemesis mine area.

RTR intends to map out the plunge extent of the known mineralisation to generate drill targets in the near-term, and subsequently fast-track RC drilling of identified targets.

RTR has signed a binding 12-month option agreement with Stonevale Enterprises Pty Ltd to acquire an 80% interest in the Nemesis project with the following terms:

– RTR to expend a minimum $60,000 before it can withdraw from the option agreement

– Rumble can extend the option for a further 6 months for $25,000 in cash payment to Vendor

– Rumble can exercise the option to acquire 80% of the project by paying A$250,000 in cash or RTR shares at any time during the 12-month option period

– Vendor is free carried to BFS

– Following the completion of a BFS and decision to mine, Vendor can either elect to contribute to ongoing project development or dilute to a 1% NSR