Rumble Resources Limited (ASX:RTR) is gearing up for a diamond drilling campaign in the prolific Fraser Range.

The Fraser Range is presently one of the hottest exploration areas in Australia, following the massive nickel discoveries made by Sirius Resources there in the past few years.

A long list of circa 20 small explorers are vying for the next significant nickel discovery in the Fraser Range. But it’s not just smaller explorers drawn to the region. Such has been the attractiveness of the area that Brazilian mining giant and leading nickel producer, Vale, has entered the fray in the past two months.

This is big news for RTR shareholders, as the ground Vale has taken up is adjacent to RTR’s Big Red Project in the Fraser Range.

With a small market cap and drilling activities in the coming weeks, any significant discovery in the Fraser Range could herald significant uplift to RTR. But like all exploration, luck will play a part.

Facilitating RTR’s chances are its recent promising exploration results. At the Zanthus Project, multiple bedrock conductors were discovered in September 2014 during ground-based electromagnetic (EM) surveys. Due to these discoveries, additional EM surveys have been planned beyond the original schedule.

Five conductors have been identified in the RTR ‘eye’ target from the EM surveys. The ground-based EM targeted priority areas in the Zanthus Project, one of which was the attractive ‘eye’ feature. An ‘eye’ feature is one that includes’ mafic intrusive complexes that have nickel, copper and platinum bodies. Sirius Resources’ Nova deposit was discovered by drilling into an ‘eye’ formation, and hence the ‘eye’ feature at Zanthus is a top priority.

RTR’s Big Red Project also has a key target of interest – a 2.2km feeder structure that exhibits high conductivity and magnetic properties. Diamond drilling is scheduled to commence in three to four weeks.

RTR has one of the largest footprints in the Fraser Range amongst ASX listed companies, with current acreage at approximately 3200km2, more than double Sirius Resources’ 1400km2. RTR’s large footprint can be attributed to the new exploration applications granted over the past few months, with the recent application for exploration licences increasing RTR’s Fraser Range presence by 71%.

Shane Sikora, CEO of RTR, said, ‘Our systematic exploration approach continues to generate compelling nickel sulphide targets at our Fraser Range projects providing our shareholders with the best chance of finding the next major nickel discovery. To identify significant bedrock conductors across an eye feature of similar size to the Nova “eye” has been an exciting development. Combine this with the interpreted Voisey’s Bay feeder system at our Big Red project and our low market cap, Rumble offers considerable leverage to exploration success.’

The systematic survey program was announced in May 2014, starting with an airborne survey of tenements in the Fraser Range. Using an airborne aeromagnetic survey, the company also identified several additional areas to survey in within a structural corridor. This additional acreage occupies an area of 14km by 5km, exhibiting large intrusive features and high magnetic readings.

Once the airborne survey was completed, the more accurate ground-based EM survey began in August 2014 in the Zanthus tenement. The ground-based EM initially covered seven areas, as shown by the star symbols in the diagram above, with one area being identified as a high priority conductive ‘eye’ feature.

The ‘eye’ feature is of key interest as ‘eye’ targets typically indicate the presence of nickel, copper or platinum. The size of the RTR ‘eye’ feature is estimated to be 2km by 1km, which is of similar size to the massive Nova deposit ‘eye’ operated by Sirius Resources.

Five bedrock conductors have been identified from the ground-based EM on the RTR ‘eye’. Importantly, three of the five bedrock conductors exhibit significant conductance and are located at relatively shallow depths. Initial analysis shows that the depth of the three highly conductive zones – named ZC1, ZC2 and ZC3 – are approximately 100-200m below surface.

The three zones showing high conductivity and shallow depth will be prioritised in the next phase of drilling.

The Big Red, north of the Zanthus and Thunderstorm tenements, also has a potential drilling target in a feeder structure that exhibits both high conductivity and magnetic qualities. The target is a 2.2km feeder structure similar to Vale’s Voisey Bay deposit – one of the most significant nickel discoveries in the past few decades.

RTR is currently in final negotiations with contractors for drilling. Drilling is tipped to commence in approximately three weeks, with approvals being expedited to meet the drilling schedule.

RTR Resources has also increased its footprint in the Big Red project. The Bid Red project is now 1491km2, increased from 308km2 previously. 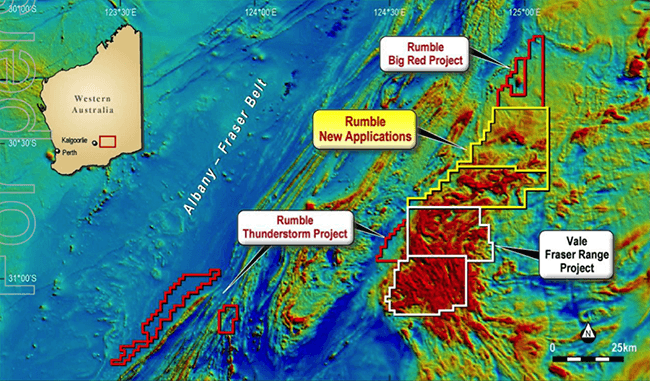 RTR applied for strategic exploration licences next to the existing Big Red acreage, increasing the Fraser Range acreage by 71%. The new areas are situated next to the new applications made by Vale in the past few months.

Given Vale’s history of nickel production, RTR’s new Big Red tenements contiguous to Vale’s tenements can be viewed as being favourably located.

Like all commodities, the long-term outlook for nickel is reflective of demand and supply forces. A supply squeeze in recent times has created upward price pressure on the metal. In January 2014, Indonesia imposed an export ban on unprocessed ores. This combined with a supply squeeze caused by geopolitical tensions in Russia and increased demand in China points to a higher nickel price over the medium and long-term.

A higher long term nickel price suits RTR well – especially if they can make a significant discovery on one of their projects.

RTR’s recent progress both at Zanthus and the Big Red have generated strong targets for the next phase of EM surveys and drilling. The systematic approach taken by RTR appears to help identify key bedrock conductors in the most attractive rock formations.

RTR has flagged that it will continue to systematically survey the Fraser Range tenements prior to commencement of the first drill program. Drilling will involve air core drilling to help determine the geology of the area and identify key targets. Diamond drilling will be used on priority targets, once identified.