Roe Hills to take on a tinge of gold for MPJ

Mining Projects Group (ASX:MPJ) is continuing work at its Roe Hills project, but it will have more of a tinge of gold than nickel.

The ASX-listed diversified junior miner told its shareholders today that initial exploration by the company had identified several gold targets at its Roe Hills project.

That project had traditionally been a nickel play, with MPJ previously drilling for the commodity there.

It said that “market reality and the current depressed nickel price” had turned its thinking on the asset, and its technical team started to look at the gold potential of the project.

An internal review of the asset’s gold potential found that MPJ had an opportunity to follow-up on gold occurrences at Roe Hills which had not been followed up for more than 15 years.

It said the review had provided a number of “walk up” gold drilling targets, saying it would aim to start a drilling program in the second and third quarters this year.

Meanwhile, it said it would continue to collate the results of its 2015 nickel drilling program which did provide promising targets – but this would be done in the background because of depressed nickel prices and a surging gold price.

MPJ has also recently entered into an option to buy the Lynas Find Assets project from Tyranna Resources (ASX:TYX), a lithium-gold project in the Pilbara region of WA.

The Golden Mile itself has produced over 70Moz over 120 years.

The Roe Hills project is flanked by Silver Lake Resources’ Mt Monger/Randalls gold operations to the west, and the Aldiss Gold Project to the immediate east. 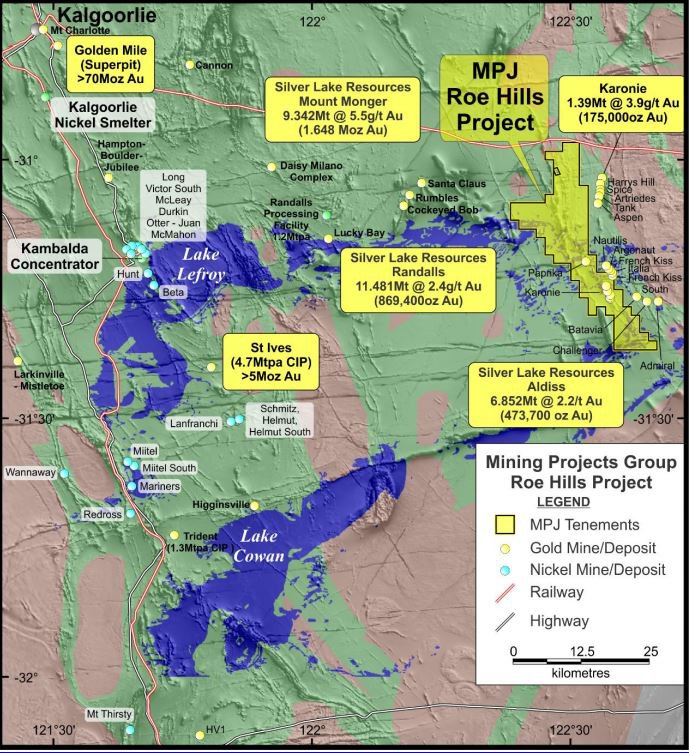 The Karonie mine meanwhile is just 5km to the north east of the Roe Hills project and was in operation by Freeport in the late 1980s. That mine produced 175,000oz from 1.4Mt at an average grade of 4g/t.

MPJ also said it was highly encouraged by the success of Tropicana and Gruyere in the area, which demonstrated the ability to apply new techniques to historically under-explored regions.

“The identification of a significant, under realised gold opportunity at Roe Hills by our technical team provides the MPJ shareholders with exposure to the strengthening gold price and adds to our very positive underlying view of the potential of the Roe Hills project to yield significant new nickel discoveries,” he said.

“However, market reality and the current depressed nickel price – which has seen the price fall to 13-year lows – makes it very difficult to attract investor support for early-stage nickel exploration.”