Shares in Riva Resources (ASX: RIR) surged more than 40% in the first half hour of trading on Wednesday morning after the company announced highly promising drilling results from its Tabac cobalt-gold project located in Western Australia with potential cobalt bearing mineralisation of 110 metres in width starting from 148 metres.

As a backdrop, multiple high grade cobalt results had been reported by previous explorers from surface geochemistry with the highest values of 2666 ppm and 2082 ppm. RIR has defined widespread cobalt anomalism from legacy data, and the current drill program is aimed at identifying mineralisation and understanding the geology in that region.

Of significance is the fact that today’s news comes only three weeks after drilling commenced near the perceived location of the shallower of the two significant historical drill holes which reportedly intersected cobalt bearing stromatolitic carbonates, returning significant intercepts of 80 metres at 0.77% cobalt from 170 metres, including 10 metres at 1.47% cobalt.

While the drillhole (TDD 001) currently in progress is yet to be completed, the promising news is that at current depth of 293 metres it has intersected similar stratigraphy to that described in the historical drill hole. Management noted that core recovery throughout the hole’s development is excellent.

There is also accurate correlation between previous data and RIR’s interpreted stratigraphy. However, the significant takeaway is in the geological detail which supports the likely presence of a substantial mineralising system.

In particular, the target Bubble Well Member (BWM) which was intersected at 148 metres below a thick package of black shale is extensively brecciated, altered, replaced and mineralised. 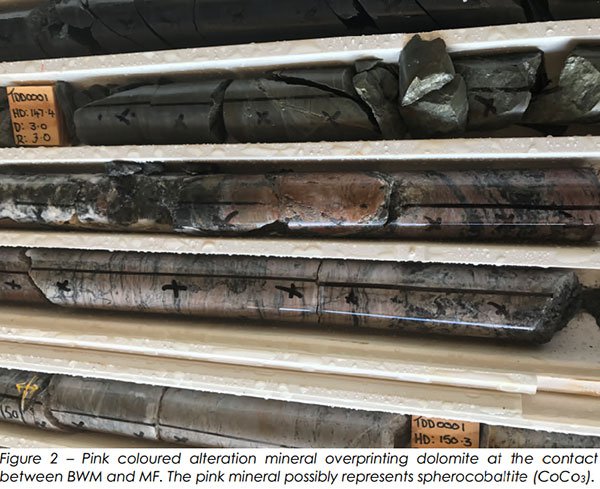 While these features are beyond what a layperson would be able to interpret, suffice to say they and other geological characteristics are viewed as highly encouraging. RIR’s Managing Director and a member of the Australian Institute of Geoscientists, Jonathan King summed up their significance in saying, “We are encouraged by the weight of geological evidence collected through development of the drillhole which supports the likely presence of a substantial mineralising system within the target BWM”.

King said that the company is looking to expedite assay work on the results, a development that could be a potential share price catalyst. At this stage they are expected to be received by mid to late May.