Raiden Resources (ASX:RDN) polymetallic Stara Planina Project in Serbia is an area that has been targeted by multinational mining groups in recent years as high-grade long life mines across both base and precious metals have been brought into production.

Among these is Rio Tinto (ASX:RIO) which has formed a joint venture with Raiden in relation to some of its other projects in reasonably close proximity to Stara Planina. 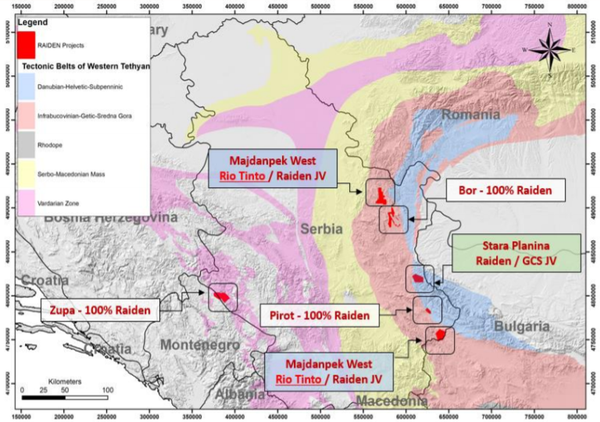 However, it remains a speculative stock and investors should seek professional financial advice if considering this stock for their portfolio.

The company has recently formed an unincorporated Joint Venture Agreement with Rio Tinto in respect to two of its six projects, whereby Rio Tinto can earn a 75% project-level position in the properties via a staged exploration commitment totalling USD$31.5 million in three stages at Rio Tinto’s election.

No doubt, Rio Tinto’s interest in some of Raiden’s projects has triggered interest by the broader investment community, and quite likely contributed to the recent rerating.

Further to that, on the back of Wednesday’s news RDN opened 13 per cent higher on and continued to trade in that range as the day progressed. The company’s shares have traded strongly over the last week increasing nearly 50 per cent from 1.2 cents to 1.7 cents as investors gained an understanding of the potential of the company’s Stara Planina Project.

Raiden also retains a 100% in the applications for Pirot, Bor and Zupa (transfer in progress) projects and an executed earn-in agreement on the Stara Planina Project, where it has the option to earn into 100% of the project.

Management considers its project portfolio prospective for intrusion-related mineralisation styles including gold, copper and other base metals.

The predominantly copper and gold mineralisation identified in soil and IP anomalies at Stara Planina’s fits the profile of the type of projects it is looking to develop.

Wednesday’s announcement that the 3000 metre maiden drilling program had commenced appears to have reignited interest in the stock.

Raiden will initially test the Aldinac and Gradiste targets which are defined by soil and Induced Polarisation anomalies.

The diamond drilling program is fully funded for the remainder of Raiden’s 2018 exploration budget, as the company systematically evaluates its highly prospective project portfolio located on the Tethyan Belt.

Exploration program cranking up in second half

On this note, managing director Dusko Ljubojevic pointed to upcoming evaluation of targets in saying, “The commencement of our maiden drilling program on the Stara Planina project is an exciting milestone as we aim to accelerate our exploration program in the second half of 2018.

“We will concurrently be evaluating further targets and we look to providing further updates as these are delivered.

“The company remains well capitalised for its 2018 exploration program as we continue to systematically evaluate targets over our highly prospective project portfolio on the world class Tethyan Belt in Serbia.

“This methodical approach will allow for a seamless transition between targets and provide consistent news flow as we continue our aggressive exploration program.”

It is this continuous newsflow which will include drilling results, providing management with an understanding of the geological characteristics and how they align with traditional ore bodies in the broader region that will also interest investors.

Assay results will provide an insight into the grades of mineralisation in the area targeted, and given the presence of a number of high grade copper-gold deposits in the region, there could be an air of confident anticipation driving the share price.