FinFeed presents this information for the use of readers in their decision to engage with this product. Please be aware that this is a very high-risk product. We stress that this article should only be used as one part of this decision-making process. You need to fully inform yourself of all factors and information relating to this product before engaging with it.

The company has recently formed an JV with Rio Tinto (ASX:RIO) in respect to two of its six projects — Majdanpek West, Majdanpek Pojas and Donje Nevlje — whereby RIO can earn a 75 per cent project-level position in the properties via a staged exploration commitment totalling US$31.5 million.

The survey is a helicopter supported system, proprietary to Geotech and consists of an electromagnetic induction loop transmitter and receiver carried underneath a helicopter to allow close terrain hugging surveys. The configuration will also carry a magnetometer to allow for the simultaneous acquisition of airborne magnetics.

The VTEM system is designed to detect and map electrical conductors at depth. This technique is effective for detection of massive sulphide lenses and connected disseminated sulphide mineralisation. Sulphides and clay zones within structures may be associated with the porphyry copper mineralisation, alteration and associated epithermal alteration zones. Some epithermal deposits, such as Cukaru Peki near Bor, are associated with large massive sulphide bodies.

The Majdanpek project license is located adjacent to RTB Bor’s Majdanpek open pit mine, which is developed on a large copper-gold porphyry. Less than one kilometre to the south west of the project boundary, RTB Bor have defined a prospect consisting of an epithermal related copper-gold-silver-zinc massive sulphide body of unknown size and grade (Coka Marin). 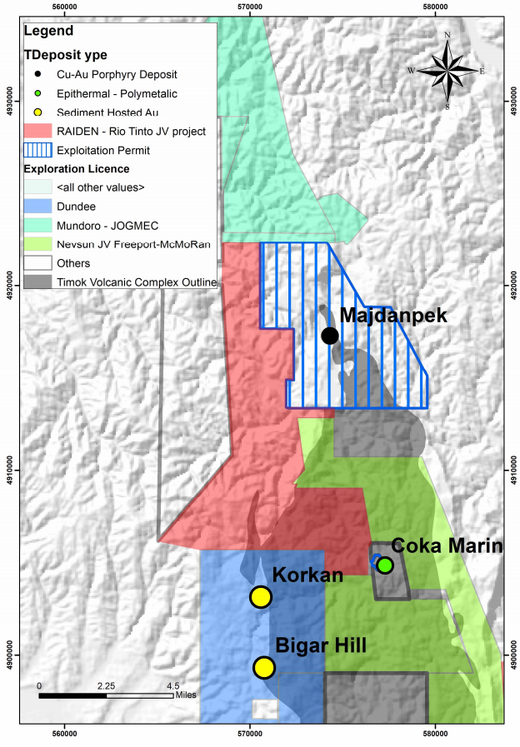 The exploration program on the project will be targeting similar style of porphyry and epithermal style mineralisation.

Managing Director Dusko Ljubojevic stated: “The commencement of the VTEM survey at Majdanpek is a significant milestone For Raiden. This project is truly in elephant country and we are excited to have access to the vast experience Rio Tinto contribute in this geological terrain.

“The company remains well capitalised for its 2018 exploration program as we continue to systematically evaluate targets over our highly prospective project portfolio in the world class Tethyan Belt in Serbia. This methodical approach will allow for a seamless transition between targets as we continue our aggressive exploration campaign.”