Peninsula Mines (ASX: PSM) has received approval from the Korean Forest Service to access two separate drilling sites which will enable the company to test high-grade gold and silver targets at the company’s wholly-owned Osu Gold Project in South Korea.

As a backdrop, the Osu project consists of one granted tenement, Osu 23 and applications for 3 adjoining tenements. The Osu 23 tenement contains the historical Baegun and Pal Gong Mines. The Osu Project has high-grade, polymetallic veins that were discovered in the 1930’s and exploited intermittently until the early 1970’s.

The first drilling site is located immediately to the west of the Pal Gong East Lode where rock-saw channel sampling by PSM was completed obliquely across a 30 metre wide zone of sulphidic sub-epithermal vein structures in and around the historical underground workings. Several high-grade, polymetallic results were produced across the veined zones.

Drilling to test down plunge extensions of high grade zones

The proposed drilling will test the down-plunge extensions of these high-grade zones within and below the area of previous historical stoping on the Pal Gong East structure.

The second drilling site is located to the east of the Pal Gong West lode where previous limited drilling in 1975 by the Korean Mineral Promotion Corporation, now the Korea Resource Corporation (KORES), intersected very high grade silver and gold mineralisation, including 0.3 metres grading 5.1 grams per tonne gold and 2,252 grams per tonne silver from 86.3 metres.

The proposed drilling from this site will include 1 to 3 diamond drill holes testing the immediate vicinity, along strike and down dip, of the previous drilling intersections below the area of historical stoping on the Pal Gong West structure.

The following graphic indicates the areas where sampling has been undertaken, and the subsequent results. 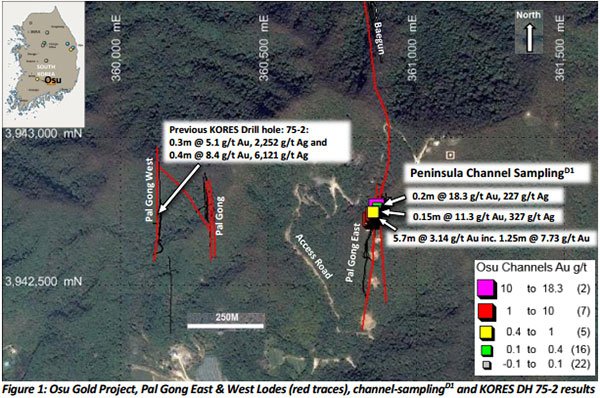 Commenting on these developments, PSM’s Managing Director Mr Jon Dugdale, said “We are very pleased to have gained access to drill the Osu high-grade gold-silver targets, which, alongside the polymetallic sulphide-porphyry targets on our Ubeong Project, will provide the Company with multiple drilling targets to test during this next exciting stage of the South Korean exploration programme”.

It is important to note that channel sampling was undertaken across narrow iron and manganese stained vein structures in and around the historic Pal Gong East mine workings. Previous drilling by KMPC (now KORES) has tested all three vein structures at shallow levels producing some very high-grade results.

Historical mining was confined to hand held mining methods resulting in very limited tonnage being recovered. Given that recent channel sampling has demonstrated evidence of steeply plunging shoot controls on the mineralization, PSM has an immediate target for the initial drilling program at Osu, and upcoming results could provide share price momentum.